Items related to The Golden Bough: A Study in Magic and Religion (Wordsworth...

The Golden Bough: A Study in Magic and Religion (Wordsworth Reference) 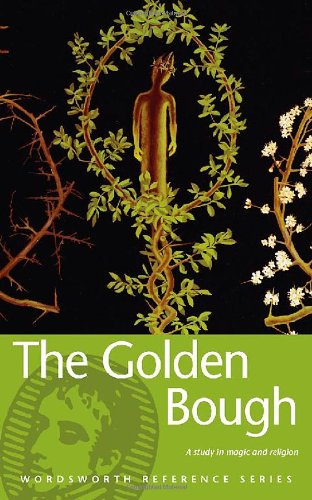 Sir James George Frazer (1854-1941) is rightly regarded as one of the founders of modern anthropology. The Golden Bough, his masterpiece, appeared in twelve volumes between 1890 and 1915. This volume is the author's own abridgement of his great work, and was first published in 1922.

Remarkable for its vast assembly of facts and its charm of presentation, it offers the thesis that man progresses from magic through religious belief to scientific thought. It discusses fertility rites, human sacrifice, the dying god, the scapegoat and many other symbols and practices which have influenced a whole generation of 20th century writers, including D.H. Lawrence, Ezra Pound and T.S. Eliot.

I'll skip reviewing the content and speak to book's edition. This is the one that was abridged by the author from a multi-volume, earlier edition. In later years, the tome was watered down and censored due to authorial speculation on the nature of Jesus. All the controversial ideas are present in this particular edition, so it is safe to purchase it and not feel cheated. --By A. D. Sian on July 4, 2007

In The Golden Bough, James George Frazer, an expert social anthropologist, explains the ancient origins of the world's myths, rituals, and religions. He shows the similarities between many cultures' strange superstitions, such as animal and human sacrifice, fertility ritual, community cleansing rituals, and others. He begins with the question of why, at Nemi in prehistoric Greek times, a warrior priest known as the King of the Wood kept his position by fighting for his life, which could be threatened at any time by his successor and murderer. By attempting to explain this ancient tradition, Frazer examines similarities between religious beliefs and shows how the belief in magic and the worship of nature was gradually transformed into the worship of religious kings and gods. Controversially, many elements of Christianity are included, such as Christ's crucifixion and the fact that many Christian holidays coincide with the dates of prehistoric pagan rituals. For the diligent skeptic of Frazer's ideas, I would advise reading the full, multi-volume edition, which includes the archeological evidence for the theories. --By translucenc on May 28, 2010

This greatly revised and enlarged twelve-volume third edition (1911–15) of the controversial work by Sir James Frazer (1854–1941) applies the techniques of comparative ethnography to classical religion. Volumes 10 and 11 (1913) continue to examine taboo behaviour, and consider the role of sunlight and firelight in ritual.

3. The Golden Bough: a Study in Magic and Religion [Paperback] Frazer, James George