Items related to Omar Al-Mukhtar: The Italian Reconquest of Libya 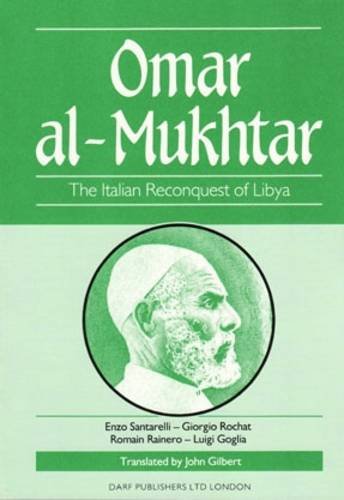 Omar al-Mukhtar was the resistance fighter who most epitomized the struggle against Italian domination in Libya in the period between the two World Wars. His courage and charisma, and his popularity both as a military and religious figurehead, made him the natural leader of his oppressed people in their attempt to free themselves of fascist tyranny. Known as 'The Lord of the Night', because only during the daylight hours could the Italians claim the country to be under their control, the eventual capture and execution of Omar al-Mukhtar marked the virtual end of organised resistance in Libya. It is against the background of his life, capture and execution in September 1931, that the authors set their wider study of the fascist recolonization of Libya. Originally published in Italy in 1981, the work is here republished in English translation for the first time.

Book Description Darf Publishers, Limited. Paperback. Condition: Very Good. A copy that has been read, but remains in excellent condition. Pages are intact and are not marred by notes or highlighting, but may contain a neat previous owner name. The spine remains undamaged. At ThriftBooks, our motto is: Read More, Spend Less. Seller Inventory # G1850771359I4N00

Book Description Darf Publishers Ltd. Condition: Good. A+ Customer service! Satisfaction Guaranteed! Book is in Used-Good condition. Pages and cover are clean and intact. Used items may not include supplementary materials such as CDs or access codes. May show signs of minor shelf wear and contain limited notes and highlighting. Seller Inventory # 1850771359-2-4