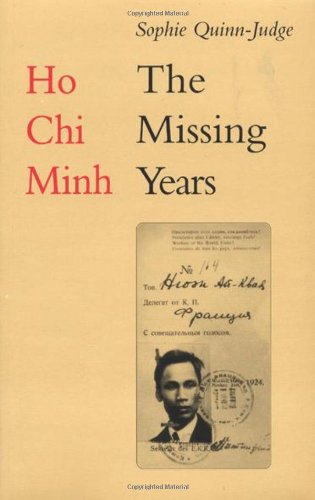 This biography focuses on Ho's early political career, from his emergence at the Paris Peace Conference in 1919, to his organisation of the Viet Minh United Front at the start of the Second World War. Using previously untapped sources from Comintern and French intelligence archives, Sophie Quinn-Judge examines Ho's life in the light of two interconnecting themes - the origins and institutional development of the Indochinese Communist Party (ICP) and the impact on early Vietnamese communism of political developments in China and the Soviet Union. She makes the case that Ho's significance within the Comintern has been overstated by both leftist and anti-communist scholarship; she shows that there were other forces and personalities who played important roles in the formation of the ICP, especially when Ho's political fortunes were on the wane. Of special interest is her treatment of the impact on Vietnamese communism of the Guomindang and the Nanyang Committee of the CCP. She also highlights the importance of Ho's family and regional ties in his efforts to maintain his influence within the ICP. From the growing body of evidence now available, she creates the foundation for a historical profile of the Vietnamese leader, a departure from the myths of left and right which have in the past been substitutes for biography.

'a thoroughly researched and elegantly written account of what is arguably the most important topic in modern Vietnamese political history A... her sources allow her to sketch a vivid, nuanced portrait of Ho Chi Minh and to unravel the complex interplay of domestic and international forces and shaped the historical emergence and development of Vietnamese Communism.' -Dr Peter Zinoman, University of California

After graduating in Russian, Sophie Quinn-Judge worked in Vietnam as a volunteer from 1973 to 1975, and lived and worked in Southeast Asia from 1977 to 1986. She was a frequent contributor to the Far Eastern Economic Review, first from Bangkok and them from Moscow from 1987 to 1992.