Items related to The Golden Thread: The Story of Writing

Ewan Clayton The Golden Thread: The Story of Writing

The Golden Thread: The Story of Writing 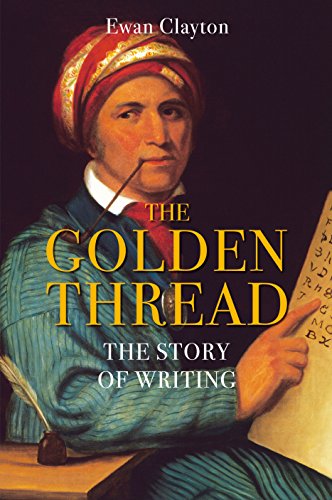 The Golden Thread is an enthralling and accessible history of the cultural miracle that is the written word. It is an invention that has been used to share ideas in every field of human endeavour, and a motor of cultural, scientific and political progress.

From the simple representative shapes used to record transactions of goods and animals in ancient Egypt, to the sophisticated typographical resources available to the twenty-first-century computer user, the story of writing is the story of human civilization itself. Ewan Clayton marks each step in the historical development of writing, and explores the social and cultural impact of every stage: the invention of the alphabet; the replacement of the papyrus scroll with the codex in the late Roman period; the perfecting of printing using moveable type in the fifteenth century and the ensuing spread of literacy; the industrialization of printing during the Industrial Revolution; the impact of artistic Modernism on the written word in the early twentieth century - and of the digital switchover at the century's close.

The Golden Thread raises issues of urgent interest for a society living in an era of unprecedented change to the tools and technologies of written communication. Chief amongst these is the fundamental question: 'What does it mean to be literate in the world of the early twenty-first century?' The Golden Thread belongs on the bookshelves of anyone who is inquisitive not just about the centrality of writing in the history of humanity, but also about its future.

Ewan Clayton has written a rich and highly accessible history of why we write as we do, and his timing is superb. To think we may lose all this is heartbreaking. --Simon Garfield, author of Just My Type
Whether his topic is Roman inscriptions, the bookkeeping traditions of the East India Company, the first admission of handwriting as evidence in a court of law, the pitfalls of the paperless office, or the experience of copying sacred texts, Clayton writes with ingenuous charm and contagious enthusiasm, often illustrating his points with "calligraphic studies" of his own. --The Paris Review
Clayton's book is punctuated with illuminating details. At every turn he brings history alive by personifying it... His book is an ideal place from which to begin an exploration of that most sophisticated of technologies - writing. --Jane Shilling, Daily Telegraph
Fabulous... Clayton punctuates his history with wonderful anecdotes --Stuart Kelly, Scotsman
A book no bibliophile should miss --Publishers Weekly, Starred Review

Ewan Clayton is Professor in Design at the University of Sunderland and co-director of the International Research Centre for Calligraphy. For a number of years he was a consultant for Xerox PARC (Palo Alto Research Center) where he worked within a research group that focused on documents and contemporary communications. He is an award-winning calligrapher and has exhibited and taught calligraphy in many parts of the world. In 2014, he was awarded an MBE for services to calligraphy and heritage crafts.

1. The Golden Thread: The Story of Writing