Items related to The Man Who Sold The World: David Bowie And The 1970s

Doggett, Peter The Man Who Sold The World: David Bowie And The 1970s

The Man Who Sold The World: David Bowie And The 1970s 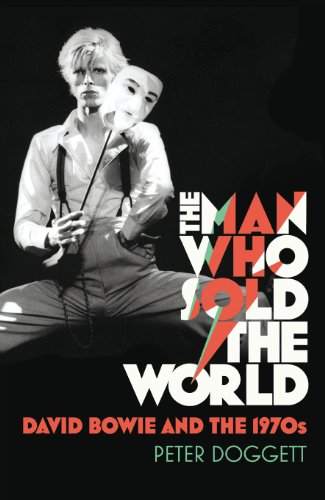 * No artist offered a more incisive and accurate portrait of the troubled landscape of the 1970s than David Bowie. Through his multi-faceted and inventive work, he encapsulated many of the social, political and cultural themes that ran through this most fascinating of decades, from the elusive promise of scientific progress to the persistent fear of apocalypse that stalked the globe.

* In The Man Who Sold The World: David Bowie and the 1970s, cultural historian Peter Doggett explores the rich heritage of the artist's most productive and inspired decade, and traces the way in which his music reflected and influenced the world around him.

* The book follows his career from 'Space Oddity', his dark vision of mankind's voyage into the unknown terrain of space, to the Scary Monsters album. It examines in detail his audacious creation of an 'alien' rock star, Ziggy Stardust, and his own increasingly perilous explorations of the nature of identity and the meaning of fame, against the backdrop of his family heritage of mental instability.

* Among the book's wider themes are the West's growing sense of insecurity in the age of oil shortages and terrorism; the changing nature of sexual roles, as represented by Bowie's pioneering adoption of a bisexual persona; the emergence of a new experimental form of rock music that would leave an indelible mark on the decades to come; and the changing nature of many of the world's great cities, including London, New York, Los Angeles and Berlin, each of which played host to Bowie during particularly creative periods of his career.

* Mixing brilliant musical critique with biographical insight and acute cultural analysis, The Man Who Sold The World is a unique study of a major artist and his times.

"What he has delivered here is an astonishing and absorbing work that expertly unpicks this explosively creative time in Bowie's life... Ultimately, Doggett's insight and enthusiasm should send you back to the music. If you do so the book will ensure you experience something entirely new" (Rob Fitzpatrick Sunday Times)

"This book tracks Bowie's ever-changing masks and alter egos...[and] helps answer the question that most Bowie fans have asked at one time or another: what the hell is he on about?" (Kevin Courtney Irish Times)

"A forensic examination of his most prolific period... Doggett exhaustively chases Bowie's inspirations and intentions as he morphs from the gender-bending glam rock Ziggy Stardust to the plastic soul-spinning Thin White Duke" (Bernard McNulty Telegraph)

Brilliant musical critique; biographical insight and acute cultural analysis, The Man Who Sold The World is a unique study of David Bowie and the 1970s.