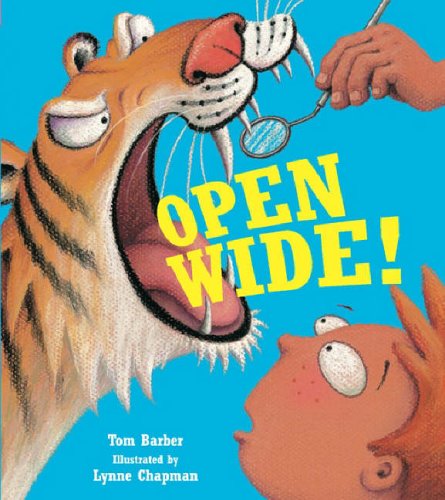 Sam doesn't like going to the dentist, not one little bit! Hiding under the dentist's chair, he is definitely not going to budge. But Mr Murgatroyd, the dentist, has seen much more tricky customers than Sam, and he distracts Sam with stories about all his other peculiar patients: a hippo with toothache; a beaver who just can't stop nibbling; and a crocodile with a whole mouthful of surprises! Before we know it, Sam has quite forgotten his fears, but he doesn't believe the dentist's stories - does he?

"Wonderfully funny. Tom Barber has created in Mr Murgatroyd a dentist every child will love. I just wish I'd had a Mr Murgatroyd when I first visited the dentist - a while ago now!" Michael Morpurgo"

Tom Barber has had an extraordinarily varied career, having trained as a doctor and psychiatrist, he then worked in horticulture and conservation, running his own landscaping business. This led to gardening journalism, a regular column for the Independent, and eventually TV presenting on Channel 4's series Garden Party. He has three children of his own and naturally has now turned his hand to writing for children! Open Wide is his first picture book. Tom lives in Nottingham. Lynne Chapman has worked as a freelance illustrator for fifteen years and has also lectured in illustration and Printmaking. Her past titles include Rickety Barn, Giddy Goat, Big Bad Wolf is Good A New House for Smudge, I'll be Your Friend, Smudge and Smudge's Grumpy Day, Morning to Evening and Funny Stories for Nine-Year-Olds. Open Wide is her first picture book for Chrysalis Children's Books. Lynne lives in Sheffield.

Book Description Chrysalis Childrens Books, 2005. Paperback. Condition: Used; Acceptable. Ex-library. Dust jacket is damaged **Simply Brit** Shipped with Premium postal service within 24 hours from the UK with impressive delivery time. We have dispatched from our book depository; items of good condition to over ten million satisfied customers worldwide. We are committed to providing you with reliable and efficient service at all times. Seller Inventory # 2919925

Book Description Pavilion Books. Paperback. Condition: As New. An apparently unread copy in perfect condition. Dust cover is intact; pages are clean and are not marred by notes or folds of any kind. At ThriftBooks, our motto is: Read More, Spend Less. Seller Inventory # G1844580539I2N00

Book Description Paperback. Condition: Good. The book has been read but remains in clean condition. All pages are intact and the cover is intact. Some minor wear to the spine. Seller Inventory # GOR002610302

Book Description Paperback. Condition: Fair. A readable copy of the book which may include some defects such as highlighting and notes. Cover and pages may be creased and show discolouration. Seller Inventory # GOR003779604