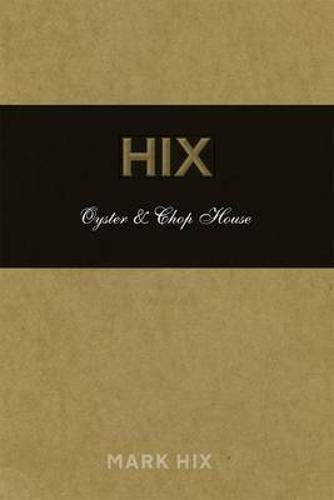 Mark Hix, favourite chef of celebrities and discerning diners alike, opened Hix Oyster & Chop House in spring 2008, just a stone's throw from London's Smithfield Meat Market. The restaurant has a relaxed feel and the menu bears all the hallmarks of his philosophy: his love of British produce, an informed approach to ingredients, and a simple, no-fuss approach to their preparation and cooking. Hix Oyster & Chop House features 100 mouth-watering recipes for dishes that appear on the menu throughout the year and focuses on the ingredients that make Mark's food particularly special. Recipes include enticing ideas for Starters, Soups, Fish, Meat, Desserts and Cocktails. There are also fascinating features on Mark's awardwinning smoked salmon, salad leaves and dressings, sauces to serve with meat and British cheeses. Oysters are a speciality and the book includes a guide to our native oysters, producers around the British Isles, and tips for opening and preparing. A feature of the restaurant is that most of the meat is cooked on the bone. Within the meat chapter, there is a comprehensive guide to flavoursome old-fashioned cuts, such as porterhouse and hanger steaks with identification photographs and advice on cooking. Mark's style of cooking is highly approachable and easy for the reader to replicate in a home kitchen. Ingredients are mostly locally sourced, techniques are straightforward and recipes are anything but time-consuming. This is the kind of book that will be in constant use. A must-have for anyone with an appreciation of fine British food.

His latest book is probably his best so far...the dishes mirror what is on the menu at his four eateries...this is what a good cook book should be. --Chandos Elletson, August 2010

This would be a great gift for the passionate British foodie --BBC Good Food Magazine, November 2010

Mark Hix was formally Chef Director of Caprice Holdings, overseeing The Ivy, Scott's, J. Sheekey and Le Caprice, four of London's most fashionable restaurants. In 2008 he opened Hix Oyster and Chop House in London and Hix Oyster and Fish House in Lyme Regis, Dorset. His latest restaurant, Hix, opened in London's Soho in October 2009 to rave reviews. Mark's commendations include GQ Chef of the Year and Tatler Restaurateur of the Year 2009. He writes for the Independent on Saturday Magazine and Country Life. Previous books include British Regional Food, winner of both a Guild of Food Writers' Award and the Andre Simon Book Award. His last book, British Seasonal Food, was The Guild of Food Writers' Cookery Book of the Year 2009. Mark has made numerous television appearances, notably BBC 2's Great British Menu.

Book Description QUADRILLE PUBLISHING, 2010. Condition: Good. Ships from the UK. Former Library book. Shows some signs of wear, and may have some markings on the inside. Seller Inventory # GRP65222663

Book Description Hardback. Condition: Very Good. The book has been read, but is in excellent condition. Pages are intact and not marred by notes or highlighting. The spine remains undamaged. Seller Inventory # GOR003223886

Book Description -. Hardcover. Condition: Very Good. Hix Oyster & Chop House This book is in very good condition and will be shipped within 24 hours of ordering. The cover may have some limited signs of wear but the pages are clean, intact and the spine remains undamaged. This book has clearly been well maintained and looked after thus far. Money back guarantee if you are not satisfied. See all our books here, order more than 1 book and get discounted shipping. Seller Inventory # 7719-9781844003921

Book Description QUADRILLE PUBLISHING, 2010. Condition: Good. A+ Customer service! Satisfaction Guaranteed! Book is in Used-Good condition. Pages and cover are clean and intact. Used items may not include supplementary materials such as CDs or access codes. May show signs of minor shelf wear and contain limited notes and highlighting. Seller Inventory # 1844003922-2-4