Items related to The Roman Textile Industry and Its Influence: A Birthday...

The Roman Textile Industry and Its Influence: A Birthday Tribute to John Peter Wild

The Roman Textile Industry and Its Influence: A Birthday Tribute to John Peter Wild 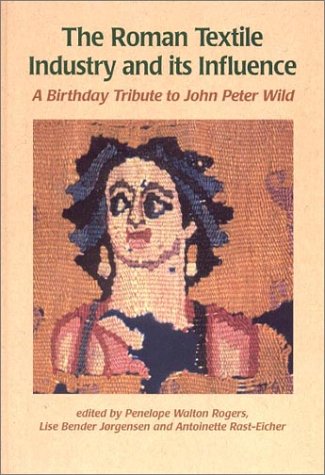 a very welcome addition to a fast-growing twenty-first-century bibliography on textiles and dress in antiquity.'--Mary Harlow "Britannia, 34, 2003 " The editors of this book not only provide a fitting tribute to a leading scholar in the field of Roman textiles but also provide a balanced and easily readable set of case studies about the use and construction of ancient textiles. This book is a very useful text for both scholars and lay readers interested in the Roman textile industry.' 'Although the focus of the book is on textiles, two recurring themes are interwoven throughout the book. The first theme relates to the range and extensive influence of the Roman textile industry. As all of the chapters in the book illustrate, the Roman textile industry was not only centered in southern Europe but extended its influence into the Near East, southern Asia, and northern Europe. Within a temporal framework, the manufacturing techniques and stylistic designs utilized by Roman weavers continued to be used to varying degrees into the late 18th and early 19th centuries. The second theme relates to the important role that older museum collections and their reexamination using modern archaeometric techniques can play when understanding the past. The overwhelming majority of the textiles discussed in this book were recovered previously and do not represent materials collected through more recent excavations. Instead, most chapter authors have chosen to reexamine previously identified textiles to confirm and/or put forth new ideas about the manufacture of ancient textiles.'--Christina B Rieth "Society for Archaeological Sciences Bulletin 25, 2002 " Despite the fact that the volume is composed of such seemingly disparate papers, several strong themes recur throughout: the importance of provenienced material; the utility of single textile pieces in providing information about chronology, origin, function, and technology; and the significance of comparative studies for the understanding of broader cultural issues.' ' ... although most of the papers contain technical descriptions of individual textile fragments, these can be easily 'avoided' by those unfamiliar with the jargon. The wide spectrum of topics and approaches to the study of Roman textiles makes this an accessible and useful volume not only for the specialists. The lay reader will find this collection of essays helpful in appreciating the incredible advances of textile studies in the last few decades. It also reflects how vast, geographically speaking, our corpus of Roman textiles is, covering almost the entire empire with the lamentable exception of Italy itself.' (For the full review go to the Bryn Mawr Classical Review website.)--Margarita Gleba "Bryn Mawr Classical Review, 2002 "

Textiles were a hugely important Roman industry yet, because of their perishable nature, only fragments remain. These 22 essays provide a detailed study of surviving fragments from across the Roman world, from the dry sands of Egypt to the Atlantic coast and the northern frontiers and beyond. The result is a comprehensive reconstruction of both everyday and exotic Roman clothing with information about the influences of fashion and of Roman weaving techniques.

1. THE ROMAN TEXTILE INDUSTRY AND ITS INFLUENCE. A BIRTHDAY TRIBUTE TO JOHN PETER WILD