Items related to Waterloo: A Near Run Thing (Great Battles) 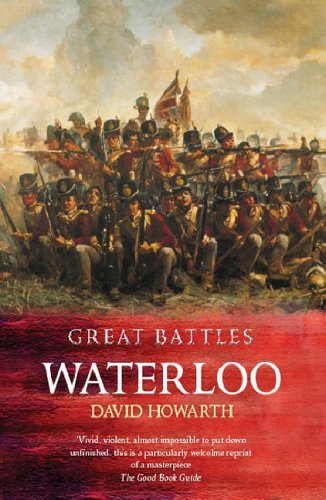 The battle began at about eleven-thirty on a Sunday morning in June 1815. By nine o'clock that night, forty thousand men lay dead or wounded among the Belgian cornfields, and Napoleon had abandoned his army and all hope of recovering his empire. This is the story of the men who were there. From their recollections, the author has recreated the battle as it appeared to them on the day it was fought. The author follows the fortunes of men of all ranks on both sides: the Duke, who had picked his ground and faultlessly led what he called an infamous army; Sir William De Lancey, his quartermaster-general; Sergeant Morris and Private Clay; and the gallant old Marshall Blucher, who saw to it that his Prussians arrived in the nick of time.

'Vivid, violent, almost impossible to put down unfinished, this is a particularly welcome reprint of a masterpiece' The Good Book Guide

David Howarth, who died in 1991, was one of Britain's best writers of historical events. He himself had worked as war correspondent for the BBC in the Second World War, reporting the chaos of Dunkirk, but with the fall of France he joined the Navy and then came under the command of the SOE (Special Operating Service) running clandestine operations between Shetland and Norway. For this he was awarded the highest honours that Norway could award a foreigner. His own naval experiences in wartime and those in peacetime as an experienced sailor and boatmaker in Shetland, allow him to write with great understanding about a battle amidst the perils of the sea.