Items related to Joseph Cornell Versus Cinema (The WISH List) 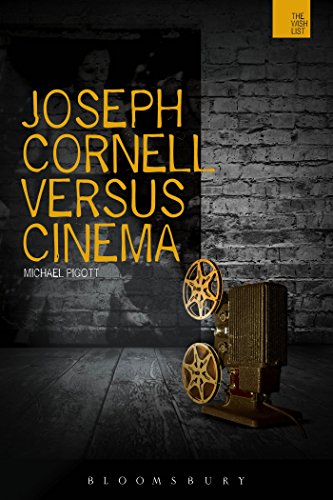 Joseph Cornell is one of the most significant American artists of the twentieth century. His work is highly visible in the the world's most prestigious galleries, including the Tate Modern and MOMA. His famous boxes and his collage work have been admired and widely studied.

However, Cornell also produced an extraordinary body of film work, a serious contribution to twentieth century avant-garde cinema, and this has been much less examined.

In this book, Michael Piggott makes the case for the significance of Joseph Cornell's films. This is an important contribution to our knowledge of twentieth century culture for scholars and students of film and art history and American studies and for all those interested in pop culture, celebrity and fandom.

Compared to other aspects of Joseph Cornell's art practice, remarkably little has been written about his films. Michael Pigott, in his rich and provocative engagement with these screen works, suggests that this critical silence "arises at least partly from the difficulty in accounting for [them] within contemporary frameworks." These are films, he argues, that operate as "solutions to problems that have only now become apparent as such" films whose significance and resonance we can now, from the vantage point of intervening decades, begin to unpack. Drawing inspiration from (among others) Siegfried Zielinski's notion of anarchaeology and Michel Foucault's archaeological investigations of sociocultural stutters and abrasions, Pigott proposes positioning Cornell as a central figure in "an alternate history of the twentieth century." In this Cornellian century, the filmmaker takes his rightful place as a key antecedent of, or influential figure within, numerous movements or strains of practice: "revelationist" film, remix culture, slow cinema. --Cinema Journal

Michael Pigott is Assistant Professor of Video Art and Digital Media, a post shared equally across the departments of History of Art, Film and Television Studies and the School of Theatre, Performance and Cultural Policy Studies at the University of Warwick, UK.

Book Description Bloomsbury Academic. Hardcover. Condition: Good. 1780934157 Bumped and creased book with tears to the extremities, but not affecting the text block. May have a remainder mark, may or may not have a dust jacket - GOOD. Seller Inventory # Z1780934157Z3

Book Description Bloomsbury Academic, 2014. Condition: Good. A+ Customer service! Satisfaction Guaranteed! Book is in Used-Good condition. Pages and cover are clean and intact. Used items may not include supplementary materials such as CDs or access codes. May show signs of minor shelf wear and contain limited notes and highlighting. Seller Inventory # 1780934157-2-4