Items related to The Rhodiola Revolution 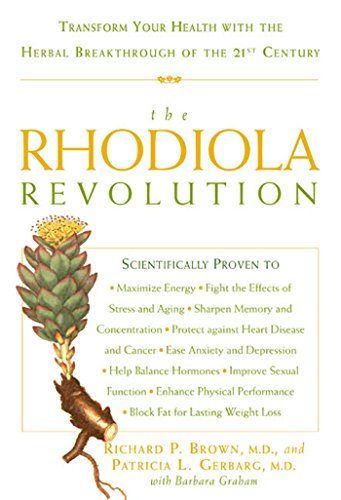 "When this book manuscript passed over my desk, I grabbed it out from all the myriad articles and reviews on which I am always working. A few years ago, I had wanted to find out more about SAM-e, a substance that could help people with problems as distinct as depression and arthritis. The first book that I encountered hardly impressed me-it seemed merely undocumented "gushing" over the miraculous substance, and I ended it unpersuaded, as well as undereducated about SAM-e.

Then I encountered Dr. Richard Brown's book: SAM-e (with Teodoro Bottiglieri Ph.D. and Carol Colman.) The book was so accessible, I found myself finishing it in a couple of days-then going back to research further some of the intriguing scientific studies it cited. What an anomaly: a book both readable and scholarly! Now I was persuaded enough to recommend SAM-e to my patients-and even try it myself for arthritis (a very bad thing for an aging amateur flying trapeze artist)--and with excellent results. Now SAM-e and Rhodiola are my daily companions! Going over the pre-publication manuscript, I found that The Rhodiola Revolution is everything that earlier book was, and even moreso. I suggest the improvement may be due to Brown's being partnered in the writing with his remarkable wife, Dr. Patricia Gerbarg. Pat perfected her writing skills over the years by helping to make Brown's many scholarly and technical papers eminently readable! (My wife Robin and I have published three books together, and when the synergy works, it can be awesome.) These two physicians, in my opinion, are just what our stressed-out twenty-first century needs. As you read their own personal stories, woven in with those of their patients healed through Rhodiola, you have no doubt that they have compassionate hearts, as well as very competent professional minds. The stories, including Pat's own struggle with the debilitating aftermath of Lyme disease-helped by Rhodiola-are believeable, personal, and engaging. The authors point out that clinical evidence does not carry the same weight as placebo-controlled scientific studies; but they provide plenty of those as well, and in ways that do not bore the reader. There is no lack of substance at all in this book, and yet it flows easily from topic to topic. Prepare yourself for an education as you encounter the Rhodiola lore these two scholar-physicians have assembled. Beginning with the "herb of invincibility" that allows the ancient Greek hero Jason to overcome fire-breathing bulls, and fierce warriors, we are taken through some very credible ethnobotanical and historical sources that show us that this little-known herb has worked its wonders for many centuries-for those wise enough to employ it! These include the residents of rugged Siberia, and of the Caucasian Georgian area, where people still walk over mountains and shovel snow off rooves at 100, and sometimes live to 130, years of age. Rhodiola grows in sub-arctic climates and at high altitudes. The herb's coping with its own stressful existence, the authors tell us, is exactly what fills it with adaptogenic phytochemicals that can help experimentally stressed-out laboratory animals-not to mention us humans. It is no wonder that during the "cold war," Former Soviet Union scientists were told to keep the herb's wonder-working properties a guarded secret. The Soviet Union wanted their own Olympic athletes, astronauts, and soldiers, with its invisible aid, to have the edge over others. We are provided very convincing evidence that the reddish, rose-fragrant sap from the plant, and the teas brewed from it, improve stamina, decrease fatigue, even calm the emotions under fatiguing conditions requiring extreme concentration-such as manning the Mir space station! It was Dr. Nikoalai, Lazarev, we are told, who identified a class of herbs referred to --Stephen Larsen, Ph.D. From the Back Cover:

This book offers healing modalities for the body, mind and spirit in an age in which our personal resources are so over-spent that we need reliable ways to replenish them. The authors show that "Rosavin," or Rhodiola Rosea, is almost a candidate for the "Panacea" (heal-all) of the ancient Greeks, or the Golden Pill of Immortality of the Chinese sages. How can a heretofore little-known plant-substance do all these things? You will have to read the book to find out how adaptogens really fills in the gaps in our physical and energetic functioning. In our challenging world and time, we need all the help we can get to cope with the stresses that come our way every day. This book shows us that if you neglect to try Rosavin, you may be missing a really important ally!
Employing sources as far-ranging as Greek mythology, ethnobotany, and the hidden monographs of Russian cold-war scientists, as well as responsible modern medical research, Dr.s Brown and Gerbarg have written a tour-de-force of a book on the healing plant Rhodiola Rosea. The reader is not only carried along effortlessly and elegantly through Brown and Gerbarg's accessible prose, but led to the inescapable conviction that this adaptogenic herb definitely enhances quality of life! In fact, after reading it, you probably won't want to wait to try Rhodiola-for everything from chronic fatigue to depression, to enhanced immune response, to generic revitalization in a sometimes tiresome world, to optimal performance (as demonstrated by the studies on astronauts and elite athletes.)
--Stephen Larsen, Ph.D. is Psychology Professor Emeritus (SUNY), and director of Stone Mountain Center for Psychotherapy, Biofeedback and Neurofeedbackin the Hudson Valley of New York. He is the author of seven books currently in print, including, with his wife Robin, A Fire in the Mind," the Life of Joseph Campbell, and The Fashioning of Angels: Partnership as Spiritual Practice.

1. The Rhodiola Revolution: Transform Your Health with the Herbal Breakthrough of the 21st Century

3. The Rhodiola Revolution: Transform Your Health with the Herbal Breakthrough of the 21st Century

9. The Rhodiola Revolution: Transform Your Health With The Herbal Breakthrough Of The 21st Century

10. The Rhodiola Revolution: Transform Your Health with the Herbal Breakthrough of the 21st Century