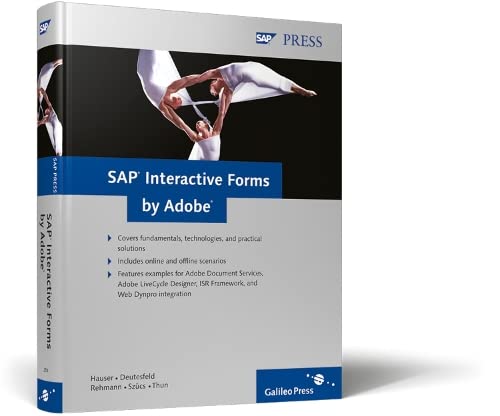 This comprehensive guide to SAP Interactive Forms by Adobe, based on SAP NetWeaver 7.0/SAP Integrated ERP 6.0, teaches you about the newest forms technology available for SAP and how to integrate it in your business processes and workflows.

The first part of the book gives you the know-how to immediately start with form design, covering the installation and configuration of software components, the design of the initial form templates with Adobe LiveCycle Designer, and the design of form output. The second part is devoted to more complex requirements in the design of online and offline forms, and includes information on output formatting, pagination, script programming, the integration of PDF forms in Web Dynpro ABAP, the use of barcode printers, and much more.

Numerous screenshots, step-by-step instructions, and undocumented tips and tricks provided directly by the product developers at SAP and Adobe help you build the solutions presented and successfully implement this new SAP forms solution.

Dr. Jurgen Hauser has worked for Adobe Systems since 2005. His responsibilities include representing Adobe at SAP AG in Walldorf, Germany; product management for SAP Interactive Forms by Adobe, and additional duties, such as local contact for Adobe Flex and Adobe AIR. He has presented SAP Interactive Forms by Adobe at numerous conferences worldwide. He previously worked as a project manager and system architect for a large German consulting firm. After finishing his studies in computer science, with a minor in mathematics, he participated in the Distributed Systems research group. He earned his doctorate in multimedia systems from the University of Stuttgart, Germany. Andreas Deutesfeld studied physics and computer science at the Johannes Gutenberg University in Mainz, Germany. After finishing his studies, he joined SAP AG in Walldorf, Germany, in 1996. His work focused on form technologies in the development of SAP NetWeaver. He has conducted numerous workshops and classes and consulted for many projects on this topic. Since 2003, he has been heavily involved as a development architect in the design and implementation process of the new form solution, SAP Interactive Forms by Adobe. He lives in a small town on the Rhine with his wife and son. Dr. Stephan Rehmann holds a PhD in low-temperature physics from the University of Bayreuth, Germany. He joined SAP AG in 1998 and worked in the development division of the overhead cost-controlling product team. At present, he is responsible for the ISR framework for SAP ERP, among other things. Thomas Szucs was senior software developer at SAP AG for the Web Dynpro ABAP division where he was in charge of Adobe integration, among other things. After almost nine years at SAP working on SD, CRM, and SAP NetWeaver, he now works as a senior solution architect at Corporate Business Solutions GmbH in Heidelberg, Germany. He is married and lives near Bruchsal, Germany, with his wife. Philipp Thun studied media system design, with a focus on computer science, at the University of Applied Sciences Darmstadt, Germany. After he finished his studies, he worked as a project coordinator for a public data center. Since 2003 he has been a developer at SAP AG in Walldorf, Germany, and has concentrated on form technologies. His work focuses on SAP Interactive Forms by Adobe. He is primarily responsible for the integration of runtime components (Adobe Document Services) with SAP NetWeaver in a joint project with Adobe.

Book Description SAP PRESS, 2009. Hardcover. Condition: Good. Item may show signs of shelf wear. Pages may include limited notes and highlighting. May include supplemental or companion materials if applicable. Access codes may or may not work. Connecting readers since 1972. Customer service is our top priority. Seller Inventory # mon0001230505

Book Description SAP Press 2009-05-30, 2009. Hardcover. Condition: Very Good. Item is in very good condition. If supplemental codes/CDs for textbooks are required please contact us prior to purchasing as they may be missing. Seller Inventory # DS-1592292542-2

Book Description Condition: Good. May have some shelf-wear due to normal use. Seller Inventory # 0KVBKE00DVM9

Book Description SAP PRESS, 2009. Condition: Good. A+ Customer service! Satisfaction Guaranteed! Book is in Used-Good condition. Pages and cover are clean and intact. Used items may not include supplementary materials such as CDs or access codes. May show signs of minor shelf wear and contain limited notes and highlighting. Seller Inventory # 1592292542-2-4