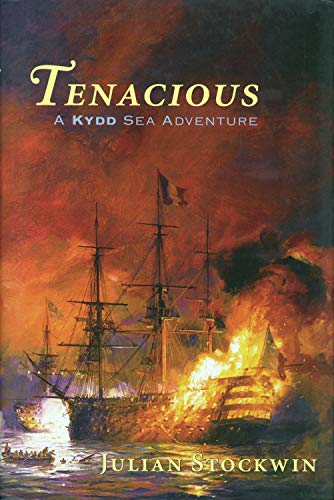 Joining the forces of Admiral Horatio Nelson during the historical Battle of the Nile, Lieutenant Thomas Kydd of the Tenacious participates in a no-holds-barred struggle for control of the Mediterranean before joining the siege of Acre, where he finds himself dangerously outnumbered.

Stockwin paints a vivid picture of life aboard the mighty ship-of-the-line... the harsh naval discipline, the rancid food, and the skill of the common sailor are all skilfully evoked. (Daily Express on KYDD)

'In the exciting sixth naval adventure set during the Napoleonic Wars, this time Captain Kydd is summoned to join Admiral Nelson's task force to undertake a perilous mission to halt dire French plans in the Mediterranean. The chase for the French fleet is on and each day the sea becomes more bloodstained.' (Weekend Gold Coast Bulletin, Australia)

'A choice book for the 200th anniversary of Nelson's greatest victory, and death . . . In a word: readable' (The Herald Sun, Australia)

I was soon turning over the pages almost indecently fast . . . Roll on, the promised adventures of Kydd and Renzi. (Independent)

The vantage point of the common sailor gives the nautical novel a fresh twist. In Stockwin's hands the sea story will continue to entrance readers across the world. ( Guardian)

The more I researched for this book, the more I came to believe that it was not Trafalgar that was Nelson’s finest hour – to my mind that came seven years earlier, in the shallow, sandy waters of Aboukir Bay, off the coast of Alexandria – at the Battle of the Nile – and an engagement which is central to this book. Tom Kydd actually meets his great hero Lord Nelson and is eye witness to his tumultuous welcome at Naples after the great victory. It is always a challenge for a writer to deal with real characters from history but no historical fiction writer dealing with the great age of sail can ignore Nelson. It was with some humility that I wrote my brief pen portrait, and I trust it gives some small insights into both the seamanship and the humanity of the man.

Book Description McBooks Press, United States, 2006. Hardback. Condition: New. Language: English. Brand new Book. This book finds Thomas Kydd aboard Tenacious, part of a small squadron commanded by Vice Admiral Horatio Nelson. Its mission is to scour the Mediterranean and locate Napoleon and his army. Kydd's newly fired ambition leads him to volunteer for shore service in the capture of Minorca. Later, he faces the great ships-of-the-line at the Battle of the Nile as the British take on the French in a no-holds-barred struggle for supremacy in southern waters. But there is one more test to come: the Siege of Acre, where Kydd and a handful of British seamen under the command of Sir Sidney Smith face an army of thirteen thousand!. Seller Inventory # ANB9781590131190