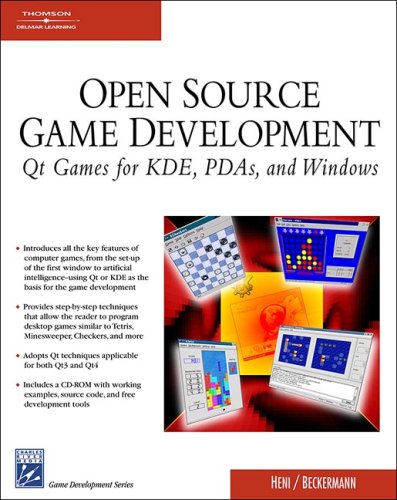 Open Source Game Development: Qt Games for KDE, PDA's, and Windows provides beginning game programmers with a step-by-step resource to game programming. Using Linux/KDE/Qt, this book enables readers to use open source programs to develop games. The book starts with a review of game design, and walks the reader through the Open Source Programs of Qt Primer, KDE, and Qt. From there it moves on to cover topics such as Canvas Games, OpenGL, graphics & sound, pathfinding, AI, particle effects, and math & physics. After reading this book, beginning game programmers will have the tools and knowledge to master open source game development. The companion CD-ROM includes C++ source code for Qt applications and all of the algorithms from the text.

Martin Heni studied physics specializing in quantum theory and colloidal physics for his diploma degree and PhD respectively. Professional experience in robotic and aerospace systems led to his current position as senior software engineer for aerospace systems. His interest in computer games manifests in the ongoing development of small desktop computer games. Andreas Beckermann is studying for a degree in computer science and for the last five years he has been involved in KDE game programming. He is lead developer for "Boson," a real time 3D strategy game for KDE. He is responsible for the graphics and network programming, in particular the "kgame" development.