Items related to The Emergence of Memory: Conversations with W. G. Sebald

The Emergence of Memory: Conversations with W. G. Sebald 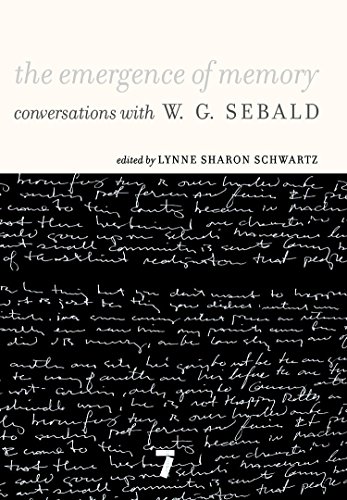 When German author W.G. Sebald died in a car accident at the age of 57, the literary world mourned the loss of a writer it was only just beginning to appreciate. Through pieces culled from essays, interviews and reviews, award-winning translator Schwartz offers a profound portrait of the late Sebald, who has been praised posthumously for his unflinching explorations of historical cruelty, memory and dislocation in post-Nazi Europe. With a host of contributors and a cogent account of almost all of Sebald's books, this is a testament to a newly-recognised master.

LYNNE SHARON SCHWARTZ is the author of fourteen works of fiction, nonfiction, and poetry, as well as the widely acclaimed memoir, Ruined by Reading. Her first novel, Rough Strife (1981), was shortlisted for a National Book Award and a PEN/Hemingway First Novel Award while her Leaving Brooklyn (1989) was nominated for the PEN/Faulkner Award in Fiction. She won the 1991 PEN Renato Pogglioli Award for her translation from the Italian of Smoke Over Birkenau, by Liana Millu. Schwartz is a native and current New Yorker.