Items related to Ephesos: Metropolis of Asia: An Interdisciplinary Approach...

Ephesos: Metropolis of Asia: An Interdisciplinary Approach to Its Archaeology, Religion and Culture (Harvard Theological Studies) 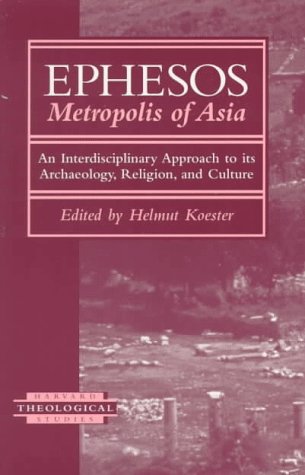 This volume brings together studies of Ephesos - a major city in the Greco-Roman period and a primary center for the spread of Christianity into the Western world - by an international array of scholars from the fields of classics, fine arts, history of religion, New Testament, ancient Christianity, and archaeology. The studies were presented at a spring 1994 Harvard Divinity School symposium on Ephesos, focusing on the results of one hundred years of archaeological work at Ephesos by members of the Austrian Archaeological Institute.
The contributors to this volume discuss some of the most interesting and controversial results of recent investigations: the Processional Way of Artemis, the Hadrianic Olympieion and the Church of Mary, the so-called Temple of Domitian, and the heroa of Androklos and Arsinoe.
Since very little about the Austrian excavations at Ephesos has been published in English, this volume should prove useful in introducing the archaeology of this metropolis to a wider readership.

Steven J. Friesen is Louise Farmer Boyer Chair in Biblical Studies at the University of Texas at Austin.

Editor Christine Thomas is a graduate of Kalaheo High School, the University of California at Berkeley and the University of East Anglia. She contributes literary criticism and feature writing to numerous publications, both national and Hawai'i-based, and was named Hawai'i's "Best New Writer" by Bamboo Ridge Press in 2008. Thomas is a former instructor in English and Creative Writing at Punahou School and Hawai'i Pacific University.

L. Michael White is Ronald Nelson Smith Chair in Classics and Christian Origins and the director of the Institute for the Study of Antiquity and Christian Origins at the University of Texas at Austin. He is the author of From Jesus to Christianity and has been featured in and co-written two award-winning PBS Frontline documentaries.

1. Ephesos Metropolis of Asia: An Interdisciplinary Approach to Its Archaeology, Religion, and Culture

2. Ephesos Metropolis of Asia: An Interdisciplinary Approach to Its Archaeology, Religion, and Culture