Items related to The Forgotten Astronauts: A rarely told chapter of...

The Forgotten Astronauts: A rarely told chapter of spaceflight history 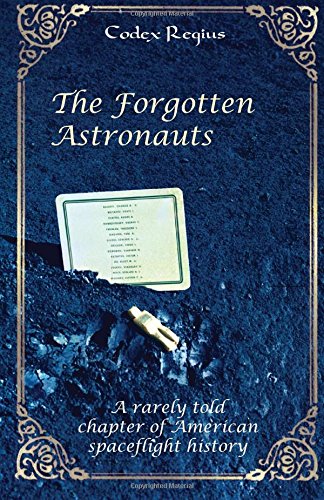 4th, updated edition In the sands of the Moon, at a place called the Marsh of Decay, there lies a little item which should not have been there. It is a tiny figurine, shaped to look like a man, and he is dead. Behind it, a plaque stucks upright in the soil, bearing fourteen names. Some sound American, some Russian. This figurine is known as the Fallen Astronaut. The crew of Apollo 15 took it there, without knowledge of their superiors, and they placed it on the Moon to commemorate their colleagues from two countries whom doom had not allowed to fly. But there are other names still, which are not even mentioned on that plaque, and their fates are lost. Who now remembers Dr Graveline, the man with the shortest astronaut career ever? Charles Bassett who was assigned to write history but dropped the quill? Robert Lawrence who would almost have performed a pioneering achievement? They were selected to make history, but history passed over them. Their stories tell a darker chapter of the American moon-landing myth. These men are the Forgotten Astronauts, those who failed and disappeared – sometimes tragically, sometimes tragicomically – and whose stories were for a long time hushed up, so they did not cloud the worship of the heroes. Their fates are told in this booklet. With 28 b/w images. Full-colour edition also available! See the book trailer on http://www.dailymotion.com/video/x2dl491_the-forgotten-astronauts-book-trailer_tech

Codex Regius is pen-name and label of a pair of two authors from Slove­nia and Germany, respectively. One of them is university engineer of chemistry and, before both set up a freelance trans­lation business, has spent her time trying to convey the wonders of the Peri­odic Table to mostly unreceptive students. The other is a graduate of phys­ical engineering and former technical editor. Both are working from home, which the children find very convenient when they come from school. The two authors of Codex Regius are married to each other and still trying to find a common language. We invite you to visit our blog at www.codex-regius.eu on which we publish news and background information on our print and e-book programme.