Items related to Convergence: The Deepest Idea in the Universe

Watson, Peter Convergence: The Deepest Idea in the Universe

Convergence: The Deepest Idea in the Universe 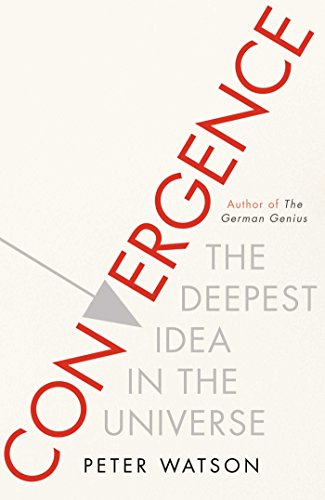 'A breath-taking panorama.' The Sunday Times

‘Those seeking a grand overview of science’s greatest hits over the past century will find it here.’ The Washington Post

'Convincing ... A provocative history probes the connections that are helping to unify scientific disciplines. ... Watson examines an impressive array of connections ... Whether you identify as a biologist, an astrophysicist, or a mathematician, one thing’s for certain: We’re all ultimately working with the same fabric.' Science

'Anyone interested in science will enjoy this fascinating, fast-paced, intellectual journey through the history of scientific ideas. Watson masterfully weaves the concept of convergence through covering an astonishing breadth of scientific and cultural domains.' Mario Livio, astrophysicist, author of Brilliant Blunders and Why?
Convergence is a history of modern science with an original and significant twist. Various scientific disciplines, despite their very different beginnings, and disparate areas of interest have been coming together over the past 150 years, converging and coalescing, to identify one extraordinary master narrative, one overwhelming interlocking coherent story: the history of the universe. Intimate connections between physics and chemistry have been revealed as have the links between quantum chemistry and molecular biology. Astronomy has been augmented by particle physics, psychology has been increasingly aligned with physics, with chemistry and even with economics. Genetics has been harmonised with linguistics, botany with archaeology, climatology with myth. This is a simple insight but one with profound consequences. Convergence is, as Nobel Prize-winning physicist Steven Weinberg has put it, ‘The deepest thing about the universe.’

This book does not, however, tell the story by beginning at the beginning and ending at the end. It is much more revealing, more convincing, and altogether more thrilling to tell the story as it emerged, as it began to fall into place, piece by piece, converging tentatively at first, but then with increasing speed, vigour and confidence. The overlaps and interdependence of the sciences, the emerging orderthat they are gradually uncovering, is without question the most enthralling aspect of twenty-first-century science.

‘Anyone interested in science will enjoy this fascinating, fast-paced, intellectual journey through the history of scientific ideas. Watson masterfully weaves the concept of convergence through covering an astonishing breadth of scientific and cultural domains.’

(Mario Livio, astrophysicist, author of Brilliant Blunders and Why)

Peter Watson was born in 1943 and was educated at universities in Durham, London and Rome. He has been on the staff of the Sunday Times and The Times, and has written for many other newspapers. He is the author of over a dozen books including Ideas: A History from Fire to Freud. He lives in London.