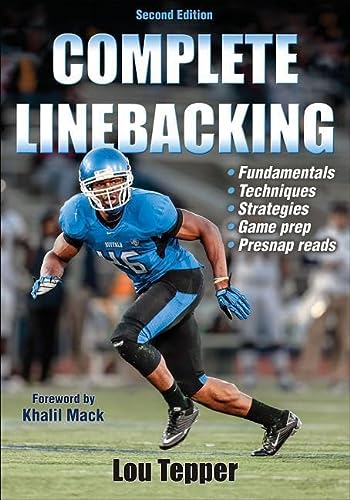 Learn from a legend. Lou Tepper, coach to more than 20 NFL linebackers, including 3 Butkus Award winners, has created the most in-depth book ever written on football s most important defensive position. In Complete Linebacking, players and coaches receive a clinic on fundamentals, presnap keys, and techniques used by inside and outside linebackers in specific defenses, including the 32, 31, 52, 51, and 33. Coverage includes 4 key linebacker diagnostic tests, 44 drills to improve linebacking skills, presnap communication, relaying defense signals from the sideline, and special practice and game grading systems to evaluate and maximize performance. The authoritative guide on playing the position, Complete Linebacking is a must-have for any linebacker, head coach, or defensive coach in today s fast-paced, ever-evolving game.

"Lou Tepper's knowledge and ability to teach and coach the linebacker position is OUTSTANDING! He is considered one of the best at any level!"

"This is perhaps the most comprehensive position book ever written, and Lou Tepper is one of the best to have ever coached the position."

"Lou Tepper is one of the best teachers and defensive minds I've ever worked with. His coaching point of 'see a little, see a lot, see a lot, see a little' defines the details and focus in his coaching. Winning is in Lou Tepper's blood. As you turn each page you will become closer to helping young men reach their goals. Enjoy learning linebacker play from one of the finest in football."