Items related to To My Sons: Lessons for the Wild Adventure Called Life

Bear Grylls To My Sons: Lessons for the Wild Adventure Called Life

To My Sons: Lessons for the Wild Adventure Called Life 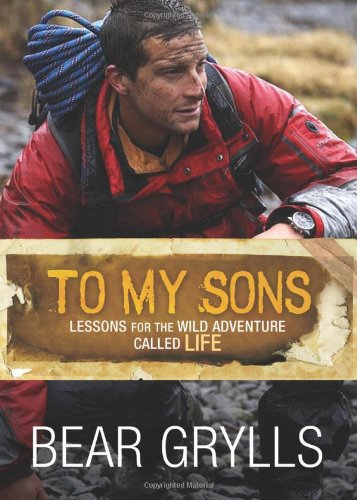 This humorously illustrated book is a collection of wisdom that renowned adventurer Bear Grylls wants to share with his sons about the risks, tumbles, and victories of a well-lived life.

Mountain climber, world-record holder, and internationally known television personality Grylls knows a thing or two about adventure. The greatest adventure he's experienced, though, is raising his three boys. In To My Sons, Grylls shares the quotes, Scripture verses, and spiritual wisdom he has learned through the literal ups and downs of an exciting life. Featuring cartoons from well-known sketch artist Charlie Mackesy, this book is a poignant primer for boys and men of all ages.

Bear Grylls is an internationally known adventurer, author, and motivational speaker who once had the world record as the youngest person to climb Mount Everest. He is also the host of Man vs. Wild, with a global audience of 1.2 billion, and the Chief Scout to 500,000 scouts in the United Kingdom. He lives with his wife, Shara, and three sons (Jesse, Marmaduke, and Huckleberry) on a barge on the Thames in London.

1. TO MY SONS: LESSONS FOR THE WILD

3. To My Sons: Lessons for the Wild Adventure Called Life