Items related to 13 Steps Down 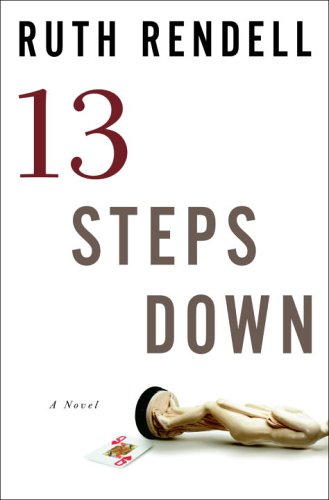 Elderly Gwendolyn Chawcer and her colorful group of friends become increasingly suspicious of her tenant, Michael "Mix" Cellini, an eccentric with an obsession for a model he has only seen once, who idolizes serial killer Reggie Christie, as his odd behavior and obsessions take an ever darker turn. 100,000 first printing.

Like several of Ruth Rendell's other novels of suspense, Thirteen Steps Down is a book about a couple of murders waiting to happen. Mix Cellini is a half-educated mechanic specializing in exercise machines, who indulges himself in alcohol, self-medication, celebrity-stalking and an obsession with Christie, the Rillington Place murderer. What dooms Cellini, and his victims, is not so much any active principle of evil, as selfishness and a tendency to drift into things that does the job almost as efficiently.

The house where he rents an apartment is a wonderful example of the Bad Place; his eighty-something landlady Gwendolyn is another person who drifts, in her case into nostalgia and slow decay. Mix is a deeply modern monster, but Gwendolyn is one of the proofs that this is not just a bitch at modernity; Mix's potential victim, supermodel Nerissa, is charming, smart and blessed. There are a few too many coincidences here for Thirteen Steps Down to quite make it on to the list of great Rendell--her best books are more tightly constructed--but it is certainly a book which her admirers will want.--Roz Kaveney

"Ruth Rendell is, unequivocally, the most brilliant mystery novelist of our time. "--Patricia Cornwell "From the Hardcover edition.

8. Thirteen Steps Down: A Novel