Items related to Physics And Politics: Or, Thoughts On The Application...

Bagehot, Walter Physics And Politics: Or, Thoughts On The Application Of The Principles Of "natural Selection" And "inheritance" To Political Society...

Physics And Politics: Or, Thoughts On The Application Of The Principles Of "natural Selection" And "inheritance" To Political Society... 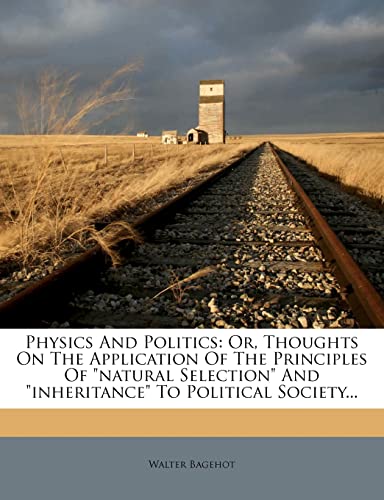 This is a reproduction of a book published before 1923. This book may have occasional imperfections
such as missing or blurred pages, poor pictures, errant marks, etc. that were either part of the original artifact,
or were introduced by the scanning process. We believe this work is culturally important, and despite the imperfections,
have elected to bring it back into print as part of our continuing commitment to the preservation of printed works
worldwide. We appreciate your understanding of the imperfections in the preservation process, and hope you enjoy this valuable book.
++++

The below data was compiled from various identification fields in the bibliographic record of this title. This data is provided as an additional tool in helping to ensure edition identification:

++++
Physics And Politics: Or, Thoughts On The Application Of The Principles Of "natural Selection" And "inheritance" To Political Society

Walter Bagehot (1826–1877) was an eminent British journalist and political observer. This book, first published in 1872, and here reissued from the second (1873) edition, contains Bagehot's discussion of the principles of social progress, providing a valuable example of the influence of evolutionary thought in the late nineteenth century.

Walter Bagehot (1826-1877) was a British journalist who wrote at length about economics, government and literature. He studied mathematics and philosophy at University College London, and was called to the bar by Lincoln's Inn. However, he settled on a life of writing, founding the National Review in 1855 and later becoming editor-in-chief of The Economist (founded by his father-in-law in 1860).