Items related to Types of Religious Experience, Christian and Non-Christian 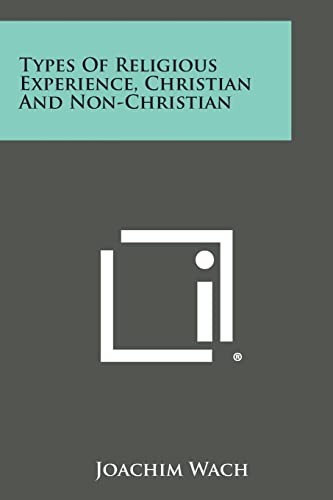 Excerpt from Types of Religious Experience, Christian and Non-Christian

This collection of papers is divided into three parts. The first three contributions which make up the first part are methodo logical in character. Since there is no equivalent for the German and French expressions 'religionswissenschaft' and science des religions' in English, History of Religions has been used pars pro toto as the term for the field of descriptive studies. The Place of the History of Religions in the Study of Theology (2) is discussed in the first paper.the second, which, in many respects, contains the core of the author's thought, summarizes his con cept of the nature of religious experience and a phenomenology of its forms of expression. It is entitled Universals in Religion because it Offers an outline of the structural elements the author believes to be characteristic of religion wherever and whenever found. It represents an attempt to go beyond the traditional exposition of the manifestations of religion (cf. Van der Leeuw's Phenomenology; Lehmann's Lehre von der Erscheinungswelt; Eliade's Morphologie) in the direction of what used to be called 'natural Theology,' but with the endeavour to avoid the rationalistic preoccupation of the earlier (eighteenth-century) conceptlons. This essay has not been published before. The third essay on The Notion of the Classical in the Study of Religion (3) develops a construct to be used by the teacher and student of religions to steer a middle course between a historistic preoccupation with completeness of data in the history of religions, and arbitrary selection based upon a traditional or freely chosen Viewpoint. All three papers owe their existence to reflections which have grown out of the experience of teaching; they, as well as several of the following contributions, are meant to stimulate thought on the way in which instruction in our field might be improved.

1. Types of Religious Experience, Christian and Non-Christian (Paperback or Softback)