Items related to A History of the Peninsular War Volume 1

Oman, Charles A History of the Peninsular War Volume 1

A History of the Peninsular War Volume 1 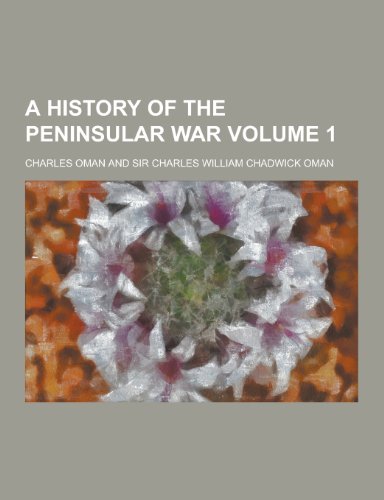 This historic book may have numerous typos and missing text. Purchasers can usually download a free scanned copy of the original book (without typos) from the publisher. Not indexed. Not illustrated. 1902 edition. Excerpt: ... SECTION IV THE ENGLISH IN PORTUGAL CHAPTER I THE OUTBREAK OF THE PORTUGUESE INSURRECTION Down to the moment of the general outbreak of the Spanish insurrection Junot's task in Portugal had not been a difficult one. As long as Spain and France were still ostensibly allies, he had at his disposition a very large army. He had entered Portugal in 1807 with 25,000 French troops, and during the spring of 1808 he had received 4,000 men in drafts from Bayonne, which more than filled up the gaps made in his battalions by the dreary march from Ciudad Rodrigo to Abrantes1. Of the three Spanish divisions which had been lent to him, Solano's had gone home to Andalusia, but he had still the two others, CarafiVs (7,000 strong) in the valley of the Tagus, and Taranco's at Oporto. The last-named general died during the winter, but his successor, Belesta, still commanded 6,000 men cantoned on the banks of the Douro. The discontent of the Portuguese during the early months of 1808 showed itself by nothing save a few isolated deeds of violence, provoked by particular acts of oppression on the part of Junot's subordinates. How promptly and severely they were chastised has been told in an earlier chapter. There were no signs whatever of a general rising: the means indeed were almost entirely wanting. The regular army had been disbanded or sent off to France. The organization of the militia had been dissolved. The greater part of the leading men of the country had fled to Brazil with the Prince-Regent: the bureaucracy and many of the clergy had shown a discreditable willingness to conciliate Junot by a tame subservience to his orders. The Duke of Abrantes himself thoroughly enjoyed his Vice1 See Thiebault, Expedition de Portugal, and Foy, iv. 363. 1808] JUNOTS...