Items related to Patterns for Turning; Comprising Elliptical and Other...

Elphinstone, Howard Warburton Patterns for Turning; Comprising Elliptical and Other Figures Cut on the Lathe Without the Use of Any Ornamental Chuck

Patterns for Turning; Comprising Elliptical and Other Figures Cut on the Lathe Without the Use of Any Ornamental Chuck 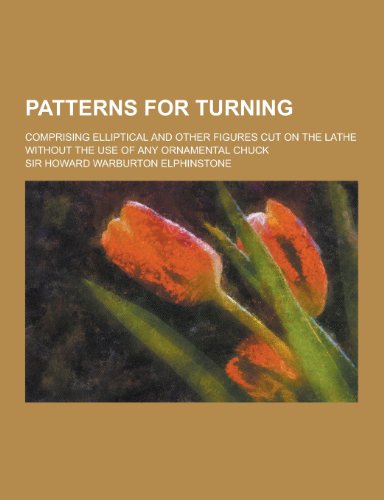 This historic book may have numerous typos and missing text. Purchasers can usually download a free scanned copy of the original book (without typos) from the publisher. Not indexed. Not illustrated. 1872 edition. Excerpt: ... It may perhaps be remarked, that if e be taken very large indeed with respect to b, the curve becomes, in theory, entirely convex, with convexity alternately increasing and diminishing: on the scale on which we work, on the lathe, this effect will never become apparent. If 2 6 = the eccentricity for the first cut, the curve exactly reaches the centre, giving rise to loops in number 5, 4, &c. If 2 b be greater than the eccentricity for the first cut, the curve passes beyond the centre, giving rise to double the number of loops. But if the original number of loops was odd, the loops produced by the branches of the curve on opposite sides of the centre lie on each other, and if b equals the eccentricity for the first cut, they are coincident. 15. The numbers given in the Tables in any column b = 100, 80, &c., are the same read upwards or downwards; their sum equals 2 b. The patterns are produced by making cuts on the curve, or on parts of the curve mentioned in the last article; and by repeating such cuts on the same curve, or part of a curve turned round through an angle. 16. The mathematician wul readily deduce all the properties of the curve on which the cuts lie, from the following considerations -- Let e and be its polar co-ordinates, then e = a ] b sin. m 0 where a and b are arbitrary constants, m is constant for the table of m-looped figures. Giving to sin. m its maxima and minima values, we have ex = a + b ea = a -- b whence = ey -- 2 b or e3 > = or = or