Items related to Memoirs of a Midget

Memoirs of a Midget 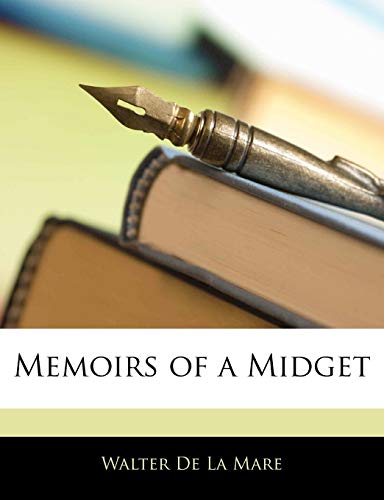 'Here is a great book.' New York Times'It sticks like a splinter in the mind.' Angela Carter'For centuries to come this book will inspire imaginative people.' Rebecca West'One of the strangest and most enchanting works of fiction ever written.' Alison Lurie --New York Times et al

Small things do come in big packages. Originally published in 1922 and just released in this new edition, Memoirs of a Midget is a faux memoir that details the life of the tiny Miss M., who ingratiates herself into high society only to find they view her merely as a curio. Resolving to claim her peculiarity as her own, she joins a traveling circus. In a mannered but limpid style, Walter de la Mare unravels his bizarre story with heart, finding a winning voice for his miniature creation. The book won the James Tait Black Memorial Prize upon publication, which put the author in the company of E.M. Forster and D.H. Lawrence, but in the literary world his stature has undeservedly remained, like that of his protagonist, diminutive. --Keith Staskiewicz Entertainment Weekly 24th November 2009

Walter de la Mare (1873-1956) was born of a Scottish mother and a father descended from an old Huguenot family. He was educated at St Paul's Cathedral Choir School, which he left at sixteen to work in the City Office of the Anglo-American Oil Company, writing in his spare time under the pseudonym Walter Ramal. He left after nine years to devote his life to letters. His collected poems were published in 1942. His works include the children's novel The Three Royal Monkeys and the long poem The Traveller. He was the recipient of much praise and many honours, including the James Tait Black Memorial Prize for Memoirs of a Midget.