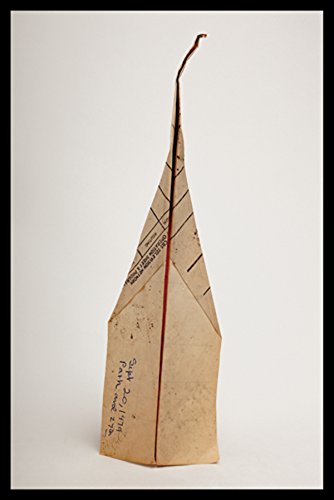 Filmmaker, painter, anthropologist, musicologist and occultist--Harry Smith (1923-1991) was an incomparable polymath and seminal figure in the realms of beat culture and avant-garde art. Smith's kaleidoscopic experimental films have influenced generations of artists and cinephiles, while his landmark three-volume compilation, the Anthology of American Folk Music (1952), laid the foundation for the folk music revival of the 1950s and 1960s. In addition to his ecstatic artwork, Smith is renowned for his vast collections of curious objects. The Collections of Harry Smith, Catalogue Raisonné series spotlights and indexes his eclectic research obsessions.
Volume one features richly detailed photographic documentation of 251 paper airplanes gathered by Smith from the streets of New York City over an approximately 20-year period. Whimsical and weird, the paper airplanes rank among Smith's most mysterious collecting pursuits. This extensive compendium presents the fruits of his extraordinary aeronautic pursuit and highlights the tangled history and myths that accompany them.

The extant collection numbers more than 250 specimens that [Smith] found on street, fished out of wastebaskets, or even, as one friend recalls, ran into traffic to retrieve... Many of the planes are annotated with the location and date of their discovery: "Prince nr Wooster 4-5-79"; "Bet 9th &10th Aves on 49th 4-24-79 In Playground."--Albert Mobilio "Bookforum "

These pieces of sculptural ephemera are artifacts of childhoods, and also of the eccentric and eager collector who sought to preserve them.--Andrea Denhoed "The New Yorker "