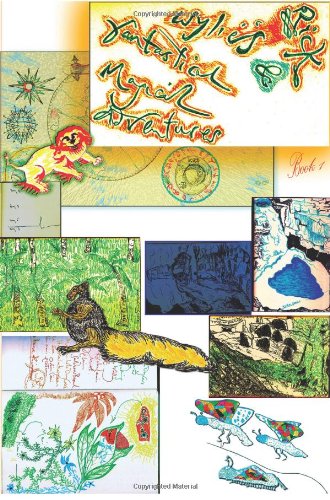 Every few thousand years, true evil, the likes of which roamed the earth eons ago, attempts to rise up from the navel of the world, to once again instil its darkness and establish its reign. Rick and Wylie?s fantastical, Magical Adventures, tells the story of a father and daughter, Rick and Wylie, who go on a week?s vacation to the island of Kaua?i, in Hawaii. Wylie buys a bag of costume jewellery from a yard sale, to decorate a ship?s anchor, as part of a school project. Amongst the jewellery, is a small quartz pebble. Wylie asks her dad can she take it with her on vacation. Rick takes teardrop shaped pebble to the old traditional Chinese jewellers, near his L.A. studio, to have a ribbon threaded through the hole, so that Wylie can tie it to the inside of her pocket, to guard against loss. The jeweller, Mr Fang, says he needs to keep on to the pebble for a few days, Rick doesn?t let him. Rick and Wylie have a great time on holiday. Friends come to visit them. They go to visit friends in Maui. In Kaua?i they go ziplining, they visit lots of places, and go kayaking. On two separate occasions Wylie tells her Dad that she has seen the jeweller, Mr Fang, lurking about. Very concerned, he contacts his Production Company staff in L.A.. They go to Mr Fang?s shop to establish his whereabouts. Strangely enough, they are unable to find Fang?s shop, it has disappeared! They all become quite anxious about this, but with only a day left, they agree it should be okay. On the last day, Rick and Wylie go on a boat trip, during which, Mr Fang can be seen on the cliff tops, screaming up to the heavens, screaming out to the ocean, as if controlling the elements. A storm ensues. The boat capsizes. Rick and Wylie are separated. Wylie is taken by the magical, invisible Manini fish, to an underground seawater cave, where she meets the Forest Keepers, Cherub like people, caretakers of the Mystical Kupono Forest; a mystical, magical forest, deep within the island of Kaua?i. The Manini fish, tell Wylie that she must wake up the Sleeping Menehune Kingdom, and that?s where her Dad will find her. On her journey, she passes from region to region, encountering many trials, and creatures. Wylie makes it to the kingdom, discovers the underground palace, and waits for her Dad to rescue her. After the boat capsized, Rick began sinking. When he realised Fang was after the Wylie?s quartz teardrop, he took charge of it. Sinking, he remembers Wylie had said there was a name scratched on the back on the teardrop. He utters the name. Suddenly he is flying up in the air, in a little fluffy cloud. Rick zooms off to the a holy mountain in Tibet, it opens up, and Rick, in his cloud, plunge down, ending up on top of the sacred Mount Meru. It transpires that the cloud is the hat of a genii, a Meru Guardian, one of the guardians of the world. The Meru Guardian takes Rick back to Kaua?i. His brother, and members of his Production Team, have come to Hawaii to join the search. Two of Rick?s friend, and his brother, return to Los Angeles, to try to contact the holy people from the sacred Mount Kailash monastery, who?s help they need in dealing with Mr Fang, who is a ten headed man-snake demon, in the form of an evil wizard, Wan Chu Fang Rick and three friends go into the Mystical Forest to search for Wylie. The route they take leads to many trials and mishaps. In the kingdom, Rick and Wylie go down a dry water well to retrieve a stone key. It?s very hair-raising with bubbling lava on their tail. In palace, their friends remain in one of the grand stone chambers, whilst Rick and Wylie go along a passageway to insert the stone key into a stone disc. They hear a loud voice, claiming to be that of the Menehune king, asking them to come forwards and declare themselves?. It?s at this point that Book 1 ends, and book 2, with a whole new fantastical, magical adventure begins? This is a wonderful story, enjoy, and have fun reading it, best wishes, Andi Katsina

Book Description KatsInc, 2009. Paperback. Condition: Used; Good. Dispatched, from the UK, within 48 hours of ordering. This book is in good condition but will show signs of previous ownership. Please expect some creasing to the spine and/or minor damage to the cover. Grubby book may have mild dirt or some staining, mostly on the edges of pages. Seller Inventory # CHL5412384

Book Description KatsInc, 2009. Paperback. Condition: Used; Good. Dispatched, from the UK, within 48 hours of ordering. This book is in good condition but will show signs of previous ownership. Please expect some creasing to the spine and/or minor damage to the cover. Damaged cover. The cover of is slightly damaged for instance a torn or bent corner. Grubby book may have mild dirt or some staining, mostly on the edges of pages. Seller Inventory # CHL5416351