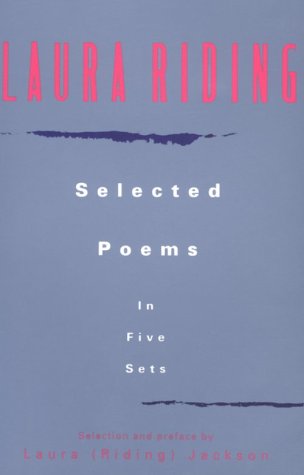 Laura Riding was born Laura Reichenthal in 1901. She became a well-known and prolific poet, critic, and editor during her expatriate years (1926-1939) in Europe. She and Robert Graves ran the Seizin Press and collaborated on works including the influential "A Survey of Modernist Poetry" (1927). Riding's many books from these years include "Contemporaries and Snobs; Poet: A Lying Word; The Life of the Dead; Progress of Stories", and her "Collected Poems" of 1938. After a long hiatus, she returned to publishing in 1972 with "The Telling". She wrote steadily until her death in 1991. Lisa Samuels has published essays on poetry and literary theory as well as a book of poems, "The Seven Voices" (1998). She teaches contemporary poetry at the university of Wisconsin, Milwaukee.