Items related to The Three Books of Occult Philosophy: A Complete Edition... 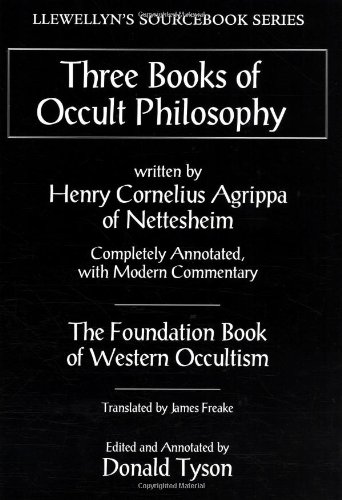 Now you can learn from the original, most important source for magic in the Western world that has ever been published, when you get Agrippa's Three Books of Occult Philosophy. This massive volume was originally published in 1531, and occultists have been drawing on it ever since. Now, Llewellyn is proud to produce the first complete reprint of the original English translation in the last 500 years. Donald Tyson edited this work and removed the hundreds of errors that appeared in the original translation. He also fully annotated the work, to make it understandable--and usable--by people today. -Discover what the Renaissance scholar knew about astrology, medicine, history, herbs, geography, animals, angels, devils, Witches, charms, the weather, and a host of other subjects -Gain immediate reference to a vast amount of arcane, but completely annotated, magical material -Find corrected drawings of seals, sigils, and magic squares, and correctly represented geomantic figures -Explore the practical Kabbalah, geomancy, the magic squares, the elements, the humors, and the Soul of the World -Consult the new Biographical dictionary for background on each of the hundreds of writers and historical figures referred to by Agrippa -Consult the new Geographical Dictionary for data on referenced rivers, mountains, nations, cities--many of which now carry different names. The Three Books of Occult Philosophy is the most complete repository of pagan and Neoplatonic magic ever compiled. This book is packed with material you will not find elsewhere, including copious extracts on magic from obscure or lost works by Pythagoras, Ptolemy, Plato, Aristotle, and many others. Tyson's detailed annotations clarify difficult references and provide origins of quotations, even expanding upon them in many cases, in order to make Agrippa's work more accessible to the modern reader. The Three Books of Occult Philosophy is the ultimate "how-to" for magical workings. It describes how to work all manner of divinations and natural and ceremonial magic in such clear and useful detail that it is still the guide for modern techniques. The extensive new supplementary material makes this wisdom practical for use today. The Three Books of Occult Philosophy is an essential reference tool for all students of the occult. Get your copy today.

The Three Books of Occult Philosophy by Agrippa is the single most important text in the history of Western occultism. Even today, occultists use the techniques first described here, although rarely giving credit to it. Barrett's The Magus is a direct plagiarism of a part of this book. The Hermetic Order of the Golden Dawn's systems of the Kabbalah, geomancy, elements, and seals and squares of the planets are all taken, in a large measure, from Agrippa--but for 500 years, Three Books of Occult Philosophy was almost impossible to find. Donald Tyson took on the Herculean task of digging out the original, correcting the errors, and fully annotating the entire work. As a result, not only is this new edition easily available to scholars, but it is now fully understandable by people today. The ancient magics, in their original form, live again. Besides the annotations, there are also extensive appendices on such topics as the elements, the magical squares, the humors, and more. Biographical and geographical dictionaries and the general index make accessing and understanding information in this book easier than ever. This is the ultimate version of the book that is the ultimate book on magic. If you are interested in any form of magic or occultism, you must get Three Books of Occult Philosophy.

Heinrich Cornelius Agrippa von Nettesheim (1486-1535) was a German magician, occult writer, theologian, astrologer, and alchemist. Editor Donald Tyson is a Canadian from Halifax, Nova Scotia. Early in life he was drawn to science by an intense fascination with astronomy. He now devotes his life to the attainment of a complete gnosis of the art of magic in theory and practice. His purpose is to formulate an accessible system of personal training composed of East and West, past and present, that will help the individual discover the reason for one's existence and a way to fulfill it.