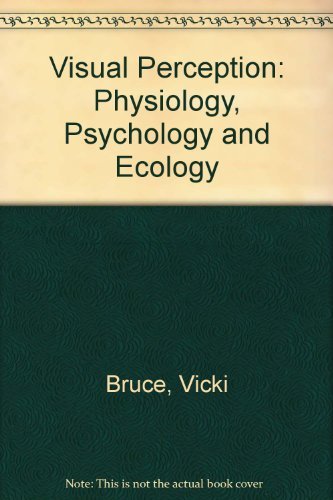 Recent theoretical developments and research findings from three different approaches to visual perception are brought together in this book. The first approach is physiological; the evolution of different types of eye and the physiology of mammalian visual pathways are described. The second is the traditional psychological approach; perceptual organization, the perception of depth and motion, and pattern recogniton are discussed in terms of the processing of information contained in retinal images. Emphasis is placed on recent computational work on these processes, and particularly on algorithms for the detection of edges and motion, the computation of stereo disparity, and object recognition. Connectionist approaches to these problems are discussed and contrasted with those of theorists such as Marr. The third perspective considered is ecological; the work of Gibson and his followers is described and applied to problems of animal and human locomotion, even perception and perception of the social world, including the human face. The book stands out from other texts on visual perception in treating both the computational and ecological approaches in detail, and in seeking to clarify the points of contact and controversy between them. It is also distinctive in placing emphasis on animal vision as well as that of humans. Aimed at advanced undergraduate psychology and zoology students, this book will also prove of value to postgraduate students and research workers. The book has been updated and substantially enlarged in its second edition, in particular to include new material on connectionism, the computation of motion and the primal sketch.

'This book is beautifully written throughout. It is clear, concise and interesting, and never makes the mistake of glossing over or avoiding important issues. I know of no other book that, in each new edition, succeeds in maintaining its coherence and its identity, while keeping pace with the changing emphasis of contemporary approaches to vision.' - Mike Harris, University of Birmingham 'The extensive revisions to the text give the book a clear edge in offering an up-to-date view of developments in the field in a very digestible form. The new edition provides the most up-to-date text on vision in the market.' - George Mather, University of Sussex

Book Description Psych Press UK, 1984. Condition: Good. 0th Edition. Former Library book. Shows some signs of wear, and may have some markings on the inside. Seller Inventory # GRP63045076

Book Description Erlbaum Associates, Incorporated, Lawrence. Hardcover. Condition: Very Good. A copy that has been read, but remains in excellent condition. Pages are intact and are not marred by notes or highlighting, but may contain a neat previous owner name. The spine remains undamaged. An ex-library book and may have standard library stamps and/or stickers. The dust jacket is missing. At ThriftBooks, our motto is: Read More, Spend Less. Seller Inventory # G0863770126I4N11

Book Description Hardback. Condition: Very Good. The book has been read, but is in excellent condition. Pages are intact and not marred by notes or highlighting. The spine remains undamaged. Seller Inventory # GOR009661784

Book Description Psych Press UK, 1984. Condition: Good. A+ Customer service! Satisfaction Guaranteed! Book is in Used-Good condition. Pages and cover are clean and intact. Used items may not include supplementary materials such as CDs or access codes. May show signs of minor shelf wear and contain limited notes and highlighting. Seller Inventory # 0863770126-2-4

Book Description Lawrence Erlbaum Associates, 1985. Condition: Poor. This is an ex-library book and may have the usual library/used-book markings inside.This book has hardback covers. In poor condition, suitable as a reading copy. No dust jacket. Please note the Image in this listing is a stock photo and may not match the covers of the actual item,850grams, ISBN:0863770126. Seller Inventory # 8018393