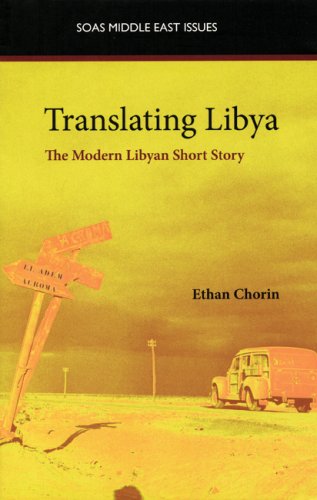 Part anthology and part travelogue, this title presents the country through the eyes of sixteen Libyan short story writers and one American diplomat. It also tells stories that trace the influence of the ancient Romans, the later Italian occupation and the influx of foreign workers from Africa and further afield.

"For too long, Libya's literature during the Gaddafi years remained a mystery as the regime systematically suppressed all expressions of literary creativity that did not glorify its leader's self-proclaimed revolution. Chorin's volume is an immensely valuable addition to much of our emerging knowledge of Libya since 2011, and fills a longstanding gap in our knowledge, and appreciation, of Libya's literary landscape."- Prof. Diederik Vandewalle, Dartmouth University, author of A History of Modern Libya and Libya Since the Revolution; "Anyone who wants to better understand Libya's complexities, past and present, could do no better than to approach them through the short stories included in the second edition of Translating Libya, and the new introduction to them. Chorin's perspective is both fascinating and extremely relevant."- Prof. Robert Springborg, King's College, London; "His presentation takes the reader around the country over a period spanning a century, and provides insights into regional and social differences, assembling what he rightly describes as a 'geographic jigsaw puzzle'.The addition of a dramatic story written during the revolution provides a critical key, or pivot between pre- and Post-Gaddafi literature."- U.S. Ambassador Richard Murphy; "Through the stories and his accompanying jottings and commentaries, Chorin throws much light on different facets of Libya...The book is at the same time a delightful mixture of travelogue, scholarly study, and a record of personal encounters."- Susanna Tarbush, Qantara --Susanna Tarbush, Qantara

Part anthology and part travelogue, "Translating Libya" presents the country through the eyes of sixteen Libyan short story writers and one American diplomat. Intrigued by the apparent absence of 'place' in modern Libyan short fiction, Ethan Chorin resolved to track down and translate stories that specifically mention cities and landmarks in Libya. The stories trace the influence of the ancient Romans, the later Italian occupation and the current influx of foreign workers from Africa and further afield. The authors open a window on today's Libya - a rapidly urbanizing country with rich oil reserves, recently renewed diplomatic relations with the West and a nascent tourist industry based on its well-preserved ancient cities. This is a unique introduction to a country that has for some time been 'off the beaten path'.