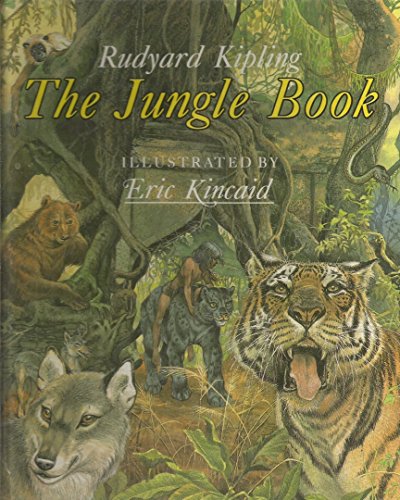 The Jungle Book is an unchanged, high-quality reprint of the original edition of 1894. Hansebooks is editor of the literature on different topic areas such as research and science, travel and expeditions, cooking and nutrition, medicine, and other genres. As a publisher we focus on the preservation of historical literature. Many works of historical writers and scientists are available today as antiques only. Hansebooks newly publishes these books and contributes to the preservation of literature which has become rare and historical knowledge for the future.

"The original stories of The Jungle Book surpass all rollicking Disneyfied expectations. On one level, the Mancub's education is pure entertainment; on another, the jungle is symbolic of Kipling's philosophy of life, a moral playground in which the young learn to swing on the vines of life" (The Times)

"Around a century ago, Rudyard Kipling laid the foundations of modern children's literature with works such as The Jungle Book, Just So Stories and Puck of Pook's Hill. Far from the fusty Victorian conventions of the time, they were wild, magnificent stories that felt as though they'd always existed, stories people might have told each other in the caves" (Daily Telegraph)

"So what makes these different to any other set of classics? In a moment of inspiration Random House had the bright idea of actually asking Key stage 2 children what extra ingredients they could add to make children want to read. And does it work? Well, put it this way...my 13-year-old daughter announced that she had to read a book over the summer holiday and, without any prompting, spotted The Boy in the Striped Pyjamas...and proceeded to read it! Now, if you knew my 13-year-old daughter, you would realise that this is quite remarkable. She reads texts, blogs and tags by the thousand - but this is the first book she has read since going to high school, so all hail Vintage Classics!" (National Association for the Teaching of English)

Learn the ways of the jungle with little Mowgli the man-cub. Swing from the trees, befriend the animals, face your primal fears