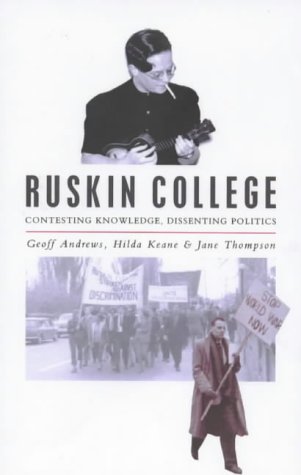 The first 100 years of Ruskin College's existence has had a profound effect on the development of adult education, giving it an international reputation. The original home of lifelong learning, Ruskin has been a unique institution, due to its particular ethos and the nature of its intake: working class students, with no formal educational qualifications who have come from a variety of trade union and community "activist" backgrounds. Based in Oxford, it has enjoyed a mixed relationship with the University, often defining itself by its difference. Its close labour movements links have meant it has been a formative influence on the development of such leading public figures as John Prescott, while it has also been the site of a range of other radical and dissenting voices. A feature of this text is the focus no the ways in which hidden and complex allegiances within the college have had a wider public impact. Avoiding the "top down" commemoratice historical approach and assuming the tradition of the pioneering History Workshop movement set up by Raphael Samuel, it assesses the significane of ruskni through the experiences of the people who have lived and worked there as students and staff.

Book Description Paperback. Condition: Very Good. The book has been read, but is in excellent condition. Pages are intact and not marred by notes or highlighting. The spine remains undamaged. Seller Inventory # GOR005806236