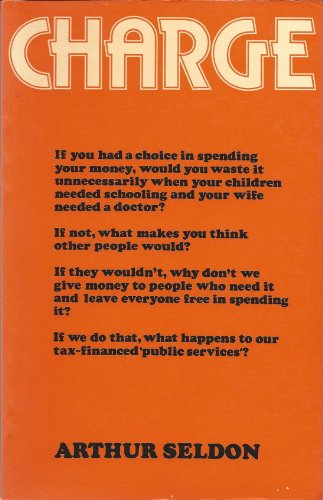 Deteriorating public services or higher taxes; ever increasing government control or callousness towards the poor. Many people speak as if these were inescapable dilemmas but in this radically questioning book the author points to a clear way out. Most of what we call public services are private services used by individuals. For historical reasons they happen to be provided by central and local government and paid for out of taxes. One by one Arthur Seldon examines these services from education and health to refuse collection and libraries. He asks how far each of them needs to be provided in this way and shows that many of them would be greatly improved if they were charged for and had to sell themselves to the public. In an analysis of the figures the author shows that most people pay for what they use, the value of the allowances and services they receive are balanced by what they pay in taxes, less the cost of the bureaucracy engaged in making the transfer. Only the richest or poorest lose or gain. Arthur Seldon (1916-2005) had a first class honours degree from the LSE and was a BMA advisor on Health Service finance and editorial director of the Institute of Economic affairs of which he was joint founder president. The book was published in 1977 and is as relevant today as it was then.

Book Description Maurice Temple Smith Ltd, 1977. Condition: Good. 1st ed. Shows some signs of wear, and may have some markings on the inside. Seller Inventory # GRP46307516

Book Description Paperback. Condition: Very Good. The book has been read, but is in excellent condition. Pages are intact and not marred by notes or highlighting. The spine remains undamaged. Seller Inventory # GOR005322298