Items related to Lord of Chaos: Book Six of 'the Wheel of Time':... 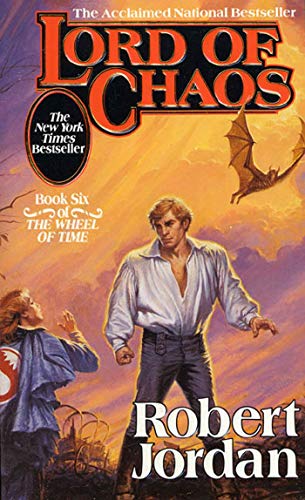 On the slopes of Shayol Ghul, the Myrddraal swords are forged, and the sky is not the sky of this world; . In Salidar the White Tower in exile prepares an embassy to Caemlyn, where Rand Al'Thor, the Dragon Reborn, holds the throne - and where an unexpected visitor may change the world.... In Emond's Field, Perrin Golden-eyes, Lord of the Two Rivers, feels the pull of ta'veren to ta'veren and prepares to march.... Morgase of Caemlyn finds a most unexpected, and quite unwelcome, ally....And south lies Illian, where Sammael holds sway....

Praise for The Wheel of Time

"The Wheel of Time [is] rapidly becoming the definitive American fantasy saga. It is a fantasy tale seldom equaled and still less often surpassed in English." - Chicago Sun-Times

"The most ambitious American fantasy saga... [may] also be the finest." - Booklist

"For those who like to keep themselves in a fantasy world, it's hard to beat the complex, detailed world created here." - Locus

"Jordan's talent for sustaining the difficult combination of suspense and resolution, so necessary in a multi-volume series such as this one, is nothing short of remarkable." - Library Journal

"A great read... Some surprising new developments... A spectacular kidnapping and rescue bring this volume to a (temporarily) satisfying conclusion. This series is so complex, I Can't recommend starting anywhere but at the beginning, but the volumes only get richer as they go along." - Locus

‘With THE WHEEL OF TIME, Jordan has come to dominate the world that Tolkien began to reveal’ THE NEW YORK TIMES

‘A powerful vision of good and evil’ ORSON SCOTT CARD

‘Epic in every sense’ THE TIMES

The Wheel of Time series:
THE EYE OF THE WORLD, THE GREAT HUNT, THE DRAGON REBORN, THE SHADOW RISING, THE FIRES OF HEAVEN, LORD OF CHAOS, A CROWN OF SWORDS, THE PATH OF DAGGERS, WINTER’S HEART