Items related to Forms of Talk CB (Conduct and Communication) 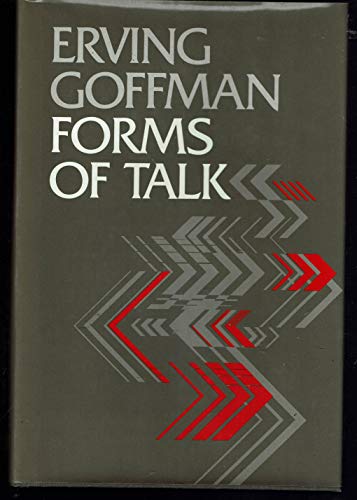 Forms of Talk extends Erving Goffman's interactional analyses of face-to-face communication to ordinary conversations and vebal exchanges. In this, his most sociolinguistic work, Goffman relates to certain forms of talk some of the issues that concerned him in his work on frame analysis. This book brings together five of Goffman's essays: "Replies and Responses," "Response Cries," "Footing," "The Lecture," and "Radio Talk." Of lasting value in Goffman's work is his insistence that behavior--verbal or nonverbal--be examined along with the context of that behavior. In all of these classic essays, there is a "topic" at hand for discussion and analysis. In addition, as those familiar with Goffman's work have come to expect, there is the wider context in which the topic can be viewed and related to other topics--a characteristic move of Goffman's that has made his work so necessary for students of interaction in many disciplines.

"[Goffman] writes like an angel . . . with a keen feeling for social reality."--New York Review of Books

"What makes [Goffman] compelling is not just the aptness of his observations or the rigors of his theoretical scheme but also his considerable gifts for rendering the everyday as bizarre and amusing."--New York Times

1. Forms of Talk (University of Pennsylvania Publications in Conduct and Communication)

2. Forms of Talk (University of Pennsylvania Publications in Conduct and Communication) Erving Goffman

3. Forms of Talk (University of Pennsylvania Publications in Conduct and Communication) Erving Goffman

4. Forms of Talk (University of Pennsylvania Publications in Conduct and Communication)