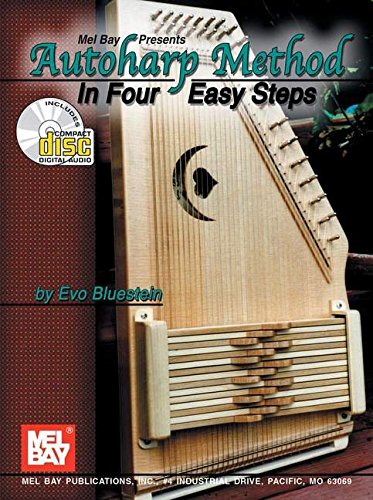 Part One of this highly regarded method includes basic music theory and details Evo's easy 4-step method. Part Two includes rhythm strumming instructions, melody chord changes, and lyrics to 18 well- known American folk songs and southern fiddle tunes in the keys of G, F, C major, and A modal (keys that are provided on standard 12, 15 and 21 bar harps). Also included are instructions for transposing to other keys. All songs are included on a solo performance CD for the purpose of ear training and accompaniment.

Multi-instrumentalist and singer Evo Bluestein brings to his music a rich legacy of American folk tradition, brilliant interpretation and original composition. Considered one of this country's most accomplished Appalachian-style autoharpists, Bluestein is equally known as a performer and teacher of oldtime fiddle, button accordion, guitar and banjo. His repertoire includes songs derived from Appalachian, Cajun, zydeco, blues and other styles of music. While performing a spirited selection of American folk songs, he delights audiences with a taste of percussive stepdancing (clogging) as well. Raised in a musical family, for many years he performed in the Bluestein Family stringband. In addition to acoustic folk concerts, Bluestein plays accordion and fiddle in his electric band, Bad Boys Zydeco.