Items related to The Finite Element Method: Its Basis and Fundamentals,

The Finite Element Method: Its Basis and Fundamentals, 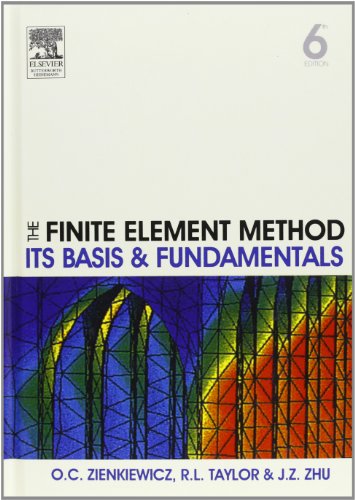 The Sixth Edition of this influential best-selling book delivers the most up-to-date and comprehensive text and reference yet on the basis of the finite element method (FEM) for all engineers and mathematicians. Since the appearance of the first edition 38 years ago, The Finite Element Method provides arguably the most authoritative introductory text to the method, covering the latest developments and approaches in this dynamic subject, and is amply supplemented by exercises, worked solutions and computer algorithms.

· The classic FEM text, written by the subject's leading authors
· Enhancements include more worked examples and exercises
· With a new chapter on automatic mesh generation and added materials on shape function development and the use of higher order elements in solving elasticity and field problems

Active research has shaped The Finite Element Method into the pre-eminent tool for the modelling of physical systems. It maintains the comprehensive style of earlier editions, while presenting the systematic development for the solution of problems modelled by linear differential equations.

Together with the second and third self-contained volumes (0750663219 and 0750663227), The Finite Element Method Set (0750664312) provides a formidable resource covering the theory and the application of FEM, including the basis of the method, its application to advanced solid and structural mechanics and to computational fluid dynamics.

O. C. Zienkiewicz was one of the early pioneers of the finite element method and is internationally recognized as a leading figure in its development and wide-ranging application. He was awarded numerous honorary degrees, medals and awards over his career, including the Royal Medal of the Royal Society and Commander of the British Empire (CBE). He was a founding author of The Finite Element Method books and developed them through six editions over 40 years up to his death in 2009.

R. L. Taylor is Emeritus Professor of Engineering and Professor in the Graduate School, Department of Civil and Environmental Engineering at the University of California, Berkeley.

1. The Finite Element Method: Its Basis and Fundamentals, Sixth Edition

4. The Finite Element Method: Its Basis and Fundamentals