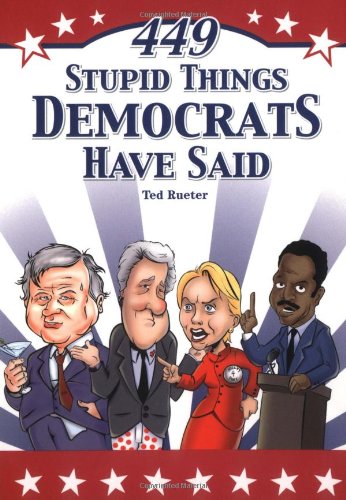 Supposedly some of our brightest speakers, politicians say some pretty stupid things. Members of America's major political parties put out a roaring stream of downright dumb comments, pronouncements, and observations. For proof, look no further than Ted Rueter's two new books, 449 Stupid Things Republicans Have Said and 449 Stupid Things Democrats Have Said.The Dems fair little better in 449 Stupid Things Democrats Have Said. Al Gore said, "I would have kissed Tipper longer at the convention." Hillary Rodham Clinton, during a 2000 campaign interview with Hot 97, a Manhattan hip-hop radio station, stated, "Motown, Motown: That's my era. Those are my people." Rueter snags them all and provides two wonderful collections of quotations that will truly go down in history.

Ted Rueter is a self-described political junkie and a professor of political science at Tulane University in New Orleans. He is the author of eight books and has written for the New York Times, USA Today, the Los Angeles Times, and the Christian Science Monitor. He earned a Ph.D. from the University of Wisconsin-Madison and has taught at Middlebury College, Georgetown University, Smith College, and UCLA. He is the founder of Noise Free America (Noisefree.org). His Web site is DrPolitics.com.