Items related to Words of Paradise 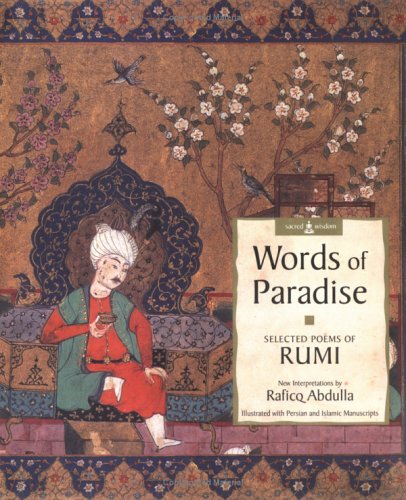 Illustrated with miniatures and borders from ancient Islamic scripts, this volume features 55 poems from the works of Jalaluddin Rumi. Rumi was a 13th-century Persian mystic who believed that all human beings can, if they surrender themselves to the power of love, live in a condition of infinite bliss. Raficq Abdulla uses rhythm and powerful imagery to recreate the ecstatic state which Rumi considered so crucual to reach enlightenment. An introduction to the book sets Rumi's life and philosophy in context and provides some explanatory guidance to the poems. At the back of the book there are further notes on each poem, written by native Persian speaker Mehri Niknam, along with information about the art provided by Tim Stanley, Deputy Curator at the Nasser D. Khalili Collection of Islamic Art.

A lovely edition of this fine translation of the 13th Sufi mystic
poet, richly decorated with miniatures and borders taken from Islamic
illuminated manuscripts from the 13th to 16th Century.
-- Yoga & Health, October 2006