Items related to A Forgotten Army: The Female Munitions Workers of South... 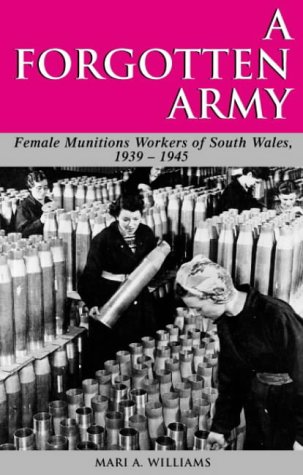 "A Forgotten Army" reconstructs the experiences of Welsh women who undertook essential munitions work during World War II. The events of wartime are placed against the background of the wider Welsh social, economic and cultural context.

"This book is especially valuable because it is sensitively attuned to the distinctive context of industrial South Wales as well as contributing to a wider understanding of women's history in twentieth century Britain . . . this is a clearly articulated and important book which deserves to be widely read . . ." -Welsh History Review

"This excellent book is the latest offering in the University of Wales Press's splendid series Studies in Welsh History. This press has recently entered a notable period of reinvigoration, during which a wealth of new historical studies have been published. This flurry of activity must surely place it at the forefront of academic presses . . . This fascinating book explains how the war, an event that is traditionally regarded as the preserve of macho posturing and male heroism, also offered opportunities for the advancement and liberation of women. Despite contemporary insistence that these were special, temporary measures for desperate times, things had changed terribly and utterly, and would never be the same again." -www.gwales.com

". . . a major contribution to our knowledge of twentieth- century Welsh women's history, as well as a significant reassessment of the impact of the Second World War on Welsh history." -Bollettino del CIRT

World War II brought about a remarkable expansion in female work opportunities in South Wales. Women suddenly found themselves performing unfamiliar work in unfamiliar surroundings and earning relatively handsome wages. Yet, despite the dramatic changes such work caused, surprisingly little is known about the experiences of women employed in the munitions factories of South Wales. "A Forgotten Army" aims to recover their lost voices and to highlight the vital role played by Welsh "munitionettes" in World War II. Through a detailed analysis of contemporary sources and interviews with former war workers, Mari Williams reconstructs the experiences of Welsh women who undertook essential munitions work. The events of wartime are placed against the background of the wider Welsh social, economic and cultural context, while their long-term effects upon the lives of women and their communities in South Wales are also discussed in detail.