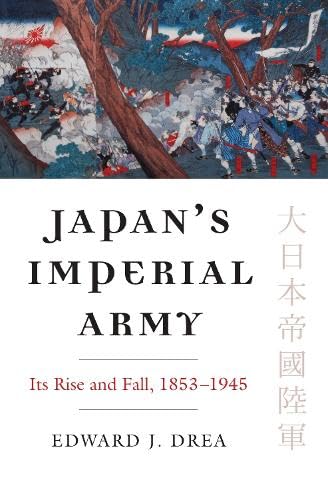 Popular impressions of the imperial Japanese army still promote images of suicidal banzai charges and fanatical leaders blindly devoted to their emperor. Edward Drea looks well past those stereotypes to unfold the more complex story of how that army came to power and extended its influence at home and abroad to become one of the world's dominant fighting forces. This first comprehensive English-language history of the Japanese army traces its origins, evolution, and impact as an engine of the country's regional and global ambitions and as a catalyst for the militarization of the Japanese homeland from mid-nineteenth-century incursions throught the end of World War II. Demonstrating his mastery of Japanese-language sources, Drea explains how the Japanese style of warfare, burnished by samurai legends, shaped the army, narrowed its options, influenced its decisions, and made it the institution that conquered most of Asia. He also tells how the army's intellectual foundations shifted as it reinvented itself to fulfill the changing imperatives of Japanese society - and how the army in turn decisively shaped the nation's political, social, cultural, and strategic course. Drea recounts how Japan devoted an inordinate amount of its treasury toward modernizing, professionalizing, and training its army - which grew larger, more powerful, and politically more influential with each passing decade. Along the way, it produced an efficient military schooling system, a well-organized active duty and reserve force, a professional officer corps that thought in terms of regional threat, and well-trained soldiers armed with appropriate weapons. Encompassing doctrine, strategy, weaponry, and civil-military relations, Drea's expert study also captures the dominant personalities who shaped the imperial army, from Yamagata Aritomo, an incisive geopolitical strategist, to Anami Korechika, who exhorted the troops to fight to the death during the final days of World War II. Summing up, Drea also suggests that an army that places itself above its nation's interests is doomed to failure.

A persuasive, well balanced, and readable history that makes an important contribution to understanding not only prewar and wartime Japanese militarism but also its residues since the war. Akira Iriye, author of Power and Culture: The Japanese-American War, 1941-1945 ""A sweeping survey, written in a forceful yet simple style, that will become the standard reference work in English for years to come."" Theodore F. Cook, coauthor of Japan at War: An Oral History ""Drea deserves his place as the chronicler and analyst of one of the most feared military forces of modern times."" Mark R. Peattie, author of Sunburst: The Rise of Japanese Naval Air Power

Edward J. Drea, recipient of the Society for Military History's Samuel Eliot Morison Award for lifetime achievement, is the author of MacArthur's ULTRA: Codebreaking and the War against Japan and In the Service of the Emperor: Essays on the Japanese Imperial Army.