Items related to The Gold of Exodus: The Discovery of the True Mount...

Blum, Howard The Gold of Exodus: The Discovery of the True Mount Sinai

The Gold of Exodus: The Discovery of the True Mount Sinai 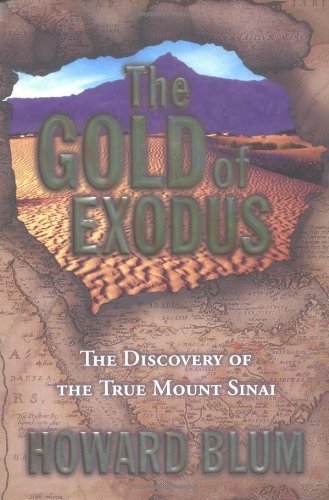 Mount Sinai. For many, it is the most sacred place on Earth-- the site where God descended to give Moses the Ten Commandments. Yet for centuries, mankind has not known its exact location. In this heart-pounding true story, award-winning journalist and bestselling author Howard Blum tells the enthralling account of two modern-day adventurers-- Larry Williams, a two-time Republican candidate for the U.S. Senate from Montana and a self-made millionaire, and his friend Bob Cornuke, a retired policemen and former SWAT team member. Lured by the prospect of finding the fabled fortune in gold that the ancient Hebrews took with them when they fled from Egypt, the two men set out to find the true site of Mount Sinai-- with only the Old Testament as a guide. Eminent biblical scholars at Harvard and the University of Pennsylvania have argued that Mount Sinai is not in the Sinai Peninsula at all, but rather in northwestern Saudi Arabia. However, they were never allowed into the kingdom to prove their argument. When Cornuke and Williams are also denied entry, they daringly sneak into Saudi Arabia. And what they discover at the mountain known as Jabal al Lawz will astonish the world-- and inspire readers to rethink the role of the Bible in history. They find the remains of the stone altar at which the Golden Calf was worshiped, the twelve pillars that Moses ordered to be erected, the cave where Moses slept, and, most sensationally, the unnaturally scorched spot on the mountaintop where God gave Moses the two stone tablets. They also explain, in a fascinating account, the truth about the parting of the Red Sea waters. And not the least of their discoveries is the fact that one of the most sacred spots on earth is now a top secret Saudi military base. As these two adventurers follow in Moses' footsteps, they become pawns in a dangerous game of international power politics and intrigue, This action-packed tale-- part high-tech treasure hunt, part modern-day spy thriller, and part biblical detective story-- is riveting. And it is all true.

Howard Blum is an award-winning former New York Times journalist, and is currently a Contributing Editor at Vanity Fair, as well as a bestselling author. His books include Gangland, Out There, I Pledge Allegiance: The Story of the Walker Spy Family and Wanted! The Gold of Exodus is being made into a motion picture by Castle Rock Entertainment from a script by John Sayles. Blum lives in Connecticut with his wife and three children.

Relates the story of two American adventurers who almost died during their attempt to identify the Saudi Arabian mountain of Jabal al Lawz as the biblical Mt. Sinai.

1. The Gold of Exodus

2. The Gold of Exodus

3. The Gold of Exodus

4. The Gold of Exodus Blum, Howard