Items related to Great Fortune: The Epic of Rockefeller Center 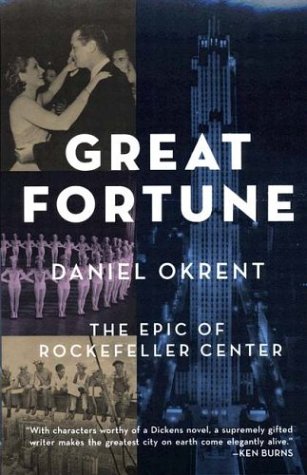 A social history of the creation of Rockefeller Center notes how its ambitious planning process was compromised by the depression; identifies the roles of such individuals as Gertrude Vanderbilt, Georgia O'Keefe, and Benito Mussolini; and cites the eccentric personalities that oversaw its construction. 50,000 first printing.

A great book. Nuanced, clever and rollicking, itÆs nonfiction as a work of art. (The New York Observer)

Altogether stirring and vivid and enjoyable. (The New Yorker) Puckish good humor and elegant prose. (The Wall Street Journal) Delightful and exhaustive (but never exhausting)à the dazzling, complex story of how New YorkÆs acropolis came to be. (The Smithsonian) About the Author:

Daniel Okrent is a prizewinning journalist, a frequent television commentator, and the author of several highly acclaimed books. For many years, he was a senior editorial executive at Time Inc. and a contributor to all of the company's major magazines.

Book Description Viking Adult, 2003. Hardcover. Condition: New. Dust Jacket Condition: new. EXCELLENT book at a sensible price. Clean, crisp, unmarked pages. Immaculate text. Dj excellent. Value for the price. We ship within 24 hours, carefully wrapped! We sell books from New to Acceptable. We take care to be accurate in our description. Most of our books were gently read and in fine condition. BNCTucsonbooks ships daily. Proceeds from the sales of books support an endowed scholarship to Brandeis University, Waltham Mass. Seller Inventory # mon0000084386