Items related to A Whisper of Roses

Teresa Medeiros A Whisper of Roses

A Whisper of Roses 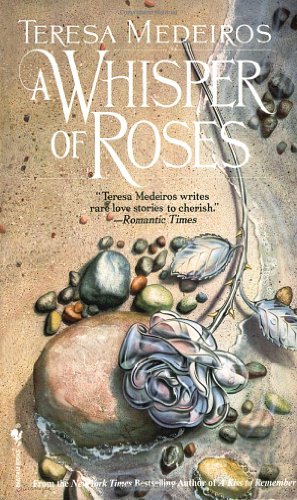 As she peered over the edge of the gallery, Sabrina Cameron trembled at the sight of the sun-bronzed giant striding into view. But she never recognized the stranger...not until the moment she found herself surrounded by arms of warm steel—and drowning in smoldering green eyes that had once held cool disdain but now shimmered with passion. Morgan MacDonnell, the boy, had been her tormentor. Now it looked as if Morgan, the man, would prove infinitely more dangerous...

Though hatred divided their clans, Morgan MacDonnell had come to Cameron Glen hoping for a truce...only to find that by evening's end the only way to avert bloodshed between the two families was for him to marry his enemy's daughter. But even as Morgan spirited Sabrina away to his rugged fortress, his battle would not be won. For this delicate rose of a girl would put up a bold fight...and the spoils of victory would be nothing less than a heathen MacDonell's heart.

Bestselling author Teresa Medieros was chosen as one of the Top Ten Favorite Romance Authors by Affair de Coeur magazine and has won the Romantic Times Reviewer's Choice Award for Best Historical Love and Laughter. A former Army brat and a registered nurse, she wrote her first novel at the age of twenty-one and has since gone on to win the hearts of critics and readers alike. The author of thirteen novels, Teresa makes her home in Kentucky with her husband and two cats.

From the enchanting pen of the bestselling Teresa Medeiros comes a tantalizing romance of love and treachery that sweeps from an ancient castle steeped in splendor to crumbling Scottish fortress poised high above the moors.