Items related to An Introduction to Godel's Theorems (Cambridge... 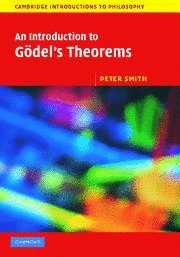 In 1931, the young Kurt Gödel published his First Incompleteness Theorem, which tells us that, for any sufficiently rich theory of arithmetic, there are some arithmetical truths the theory cannot prove. This remarkable result is among the most intriguing (and most misunderstood) in logic. Gödel also outlined an equally significant Second Incompleteness Theorem. How are these Theorems established, and why do they matter?  Peter Smith answers these questions by presenting an unusual variety of proofs for the First Theorem, showing how to prove the Second Theorem, and exploring a family of related results (including some not easily available elsewhere). The formal explanations are interwoven with discussions of the wider significance of the two Theorems. This book will be accessible to philosophy students with a limited formal background. It is equally suitable for mathematics students taking a first course in mathematical logic.

'Smith has written a wonderful book giving a clear and compelling presentation of Gödel's Theorems and their implications. His style is both precise and engaging at the same time. The clarity of the writing is impressive, and there is a pleasing coverage of historical and philosophical topics. An Introduction to Gödel's Theorems will work very well either as a textbook or as an introduction for any reader who wants a thorough understanding of some of the central ideas at the intersection of philosophy, mathematics and computer science.' Christopher Leary, State University of New York

'Peter Smith has succeeded in writing an excellent introduction to Gödel's incompleteness theorems and related topics which is accessible without being superficial. Philosophers in particular will appreciate the discussions of the Church-Turing Thesis, mechanism, and the relevance of Gödel's results in the philosophy of mathematics. It is certain to become a standard text.' Richard Zach, University of Calgary

'... it is, without doubt, a mandatory reference for every philosopher interested in philosophy of mathematics. The text is, in general, written in a prose style but without avoiding formalisms. It is very accurate in the mathematical arguments and it offers to mathematicians and logicians a detailed approach to Gödel's theorems, covering many aspects which are not easy to find in other standard presentations.' Mathematical Reviews

What are Gödel's Theorems, how were they established and why do they matter? Written with great clarity, this book is accessible to philosophy students with a limited formal background. It is equally valuable to mathematics students taking a first course in mathematical logic.