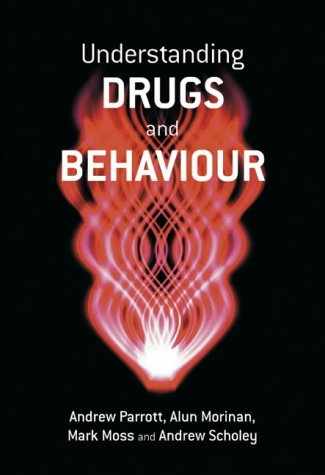 Why are some drugs highly addictive? What exactly are the effects of different types of psychoactive drugs? How can they produce such dramatic effects on mood, cognition, sensation, awareness, health and well–being?

Understanding Drugs and Behaviour describes in detail how the main psychoactive drugs can alter brain chemistry and modify behaviour. Written by experienced lecturers with a high level of research expertise, all the main drugs used in today s society are included, such as alcohol, nicotine, cannabis, LSD and Ecstacy, opiates, CNS stimulants, as well as clinical medications.

Teaching and learning features include:

This introductory text will be of use to students of psychology, behavioural sciences, health sciences, nursing, physiology and pharmacology.

“...really helps the reader to understand both conditions and treatments...a very informative and useful resource...” (Accident & Emergency Nursing, No.13, 2005)

“The coverage of the behavioural effects of a number of recreational substances is clear and informative, with particularly fine chapters on nicotine and cannabis” (Psychological Medicine, Vol.35 2005)

Andy Parrott has published over 300 journal articles and conference papers, covering a wide range of psychoactive drugs. The first publications from his PhD at the University of Leeds were concerned with antipsychotic medications. Then, as a postdoctoral researcher with the Human Psychopharmacology Research Unit at Leeds University, he investigated the effects of second–generation antidepressants and benzodiazepines on cognitive performance and car–driving skills. Moving to the Institute of Naval Medicine in Hampshire, he was tasked with determining the practical utility of anti–seasickness medications, such as transdermal scopolamine, in land and sea trials. Further trials investigated the cognitive side effects of nerve agent prophylactics. At the University of East London he established the Recreational Drugs Research Group, which investigated a number of disparate topics: caffeine in shift workers, anabolic steroids in weightlifters, amphetamine and LSD in party goers and nootropics as potential smart drugs . At Humboldt State University in California, he assessed the everyday functioning of excessive cannabis users. However, his two main research areas are nicotine and MDMA/Ecstasy. In an extensive research programme he has shown how nicotine dependency is psychologically damaging and causes increased psychological distress. The Recreational Drugs Research Group which he founded at the University of East London is, however, most well known for its work with recreational MDMA/Ecstasy users. Their cognitive research papers have been awarded the British Association for Psychopharmacology Organon prize on two occasions. Professor Parrott s work is featured regularly in the media. He sits on the editorial boards of leading psychopharmacology journals, and he has organised a number of international symposia. Recently, he moved to the University of Wales at Swansea. Here, he is continuing with a number of collaborative studies, including a large UK/US prospective study investigating the effects of recreational drug use during pregnancy.

Mark Moss studied applied chemistry and spent 10 years in industry before returning to university to study Psychology. He completed his PhD in 1999 and was involved in the establishment of the Human Cognitive Neuroscience Unit at Northumbria University. His research portfolio has focused primarily on aspects of cognitive functioning in healthy young volunteers, with journal articles and conference presentations relating to both enhancement through natural interventions and drug–induced impairments. Mark is currently programme leader for the Division of Psychology at Northumbria University.

Andrew Scholey is a Reader in Psychology at the Division of Psychology, Northumbria University, Newcastle–upon–Tyne. He has published hundreds of journal articles and conference papers, covering the cognitive effects of many recreational and medicinal drugs. His PhD and postdoctoral fellowship at the Brain and Behaviour Research Group, Open University, examined the neurochemical substrates of memory formation. He moved to Northumbria University in 1993, where his research has concentrated on the acute and chronic impairing and enhancing effects of various drugs including benzodiazepines, alcohol, caffeine, glucose, oxygen (with Mark Moss) and herbal extracts. In 1999 Andrew established the Human Cognitive Neuroscience Unit, of which he is the director. The work of this unit concentrates on the potential for nonmainstream treatments to enhance cognitive performance. These have ranged from metabolic interventions (notably glucose and oxygen) to low doses of alcohol and even to drinking water (in thirsty individuals) and to chewing gum. Andrew is also the co–director of the Medicinal Plant Research Centre. His present focus of research aims to disentangle the neurocognitive effects of herbal extracts, to attempt to identify relationships between their behavioural effects and their neurochemical properties and to identify safe treatments that may be effective in the treatment of conditions where cognition becomes fragile, including dementia. He is currently involved in trials examining the effects of herbal extracts in Alzheimer s disease. Andrew is also committed to the public dissemination of science which has led to numerous appearances in the print, radio and television media.

Book Description Hardcover. Condition: Used; Good. **Simply Brit** Shipped with Premium postal service within 24 hours from the UK with impressive delivery time. We have dispatched from our book depository; items of good condition to over ten million satisfied customers worldwide. We are committed to providing you with reliable and efficient service at all times. Seller Inventory # 3105092

Book Description Hardcover. Condition: Good. No Jacket. Item is in good condition. Some moderate creases and wear. This item may not come with CDs or additional parts including access codes for textbooks. This may not have a dust jacket. Might be an ex-library copy and contain writing/highlighting. Photos are stock pictures and not of the actual item. Seller Inventory # DS-0470850590-3