Items related to Parable of the Talents 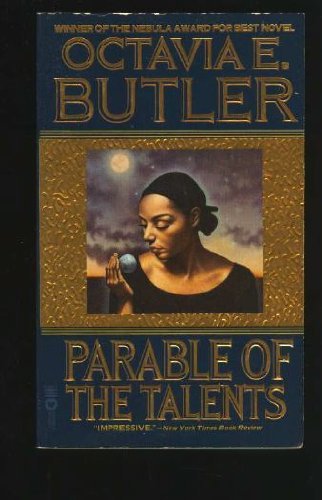 In the sequel to the acclaimed Parable of the Sower, Lauren Olamina's daughter Larkin describes the broken and alienated world of 2032, as war wracks the North American continent and an ultra-conservative, religious crusader becomes president. Winner of the Nebula Award. Reprint.

Octavia Butler tackles the creation of a new religion, the making of a god, and the ultimate fate of humanity in her Earthseed series, which began with Parable of the Sower, and now continues with Parable of the Talents. The saga began with the near-future dystopian tale of Sower, in which young Lauren Olamina began to realize her destiny as a leader of people dispossessed and destroyed by the crumbling of society. The basic principles of Lauren's faith, Earthseed, were contained in a collection of deceptively simple proverbs that Lauren used to recruit followers. She teaches that "God is change" and that humanity's ultimate destiny is among the stars.

In Parable of the Talents, the seeds of change that Lauren planted begin to bear fruit, but in unpredictable and brutal ways. Her small community is destroyed, her child is kidnapped, and she is imprisoned by sadistic zealots. She must find a way to escape and begin again, without family or friends. Her single-mindedness in teaching Earthseed may be her only chance to survive, but paradoxically, may cause the ultimate estrangement of her beloved daughter. Parable of the Talents is told from both mother's and daughter's perspectives, but it is the narrative of Lauren's grown daughter, who has seen her mother made into a deity of sorts, that is the most compelling. Butler's writing is simple and elegant, and her storytelling skills are superb, as usual. Fans will be eagerly awaiting the next instalment in what promises to be a moving and adventurous saga. --Therese Littleton, Amazon.com