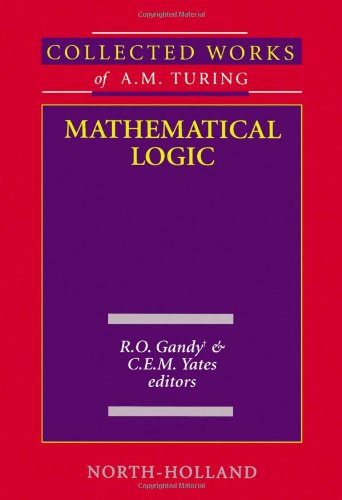 Mathematical Logic is a collection of the works of one of the leading figures in 20th-century science. This collection of A.M. Turing's works is intended to include all his mature scientific writing, including a substantial quantity of unpublished material. His work in pure mathematics and mathematical logic extended considerably further; the work of his last years, on morphogenesis in plants, is also of the greatest originality and of permanent importance.
This book is divided into three parts. The first part focuses on computability and ordinal logics and covers Turing's work between 1937 and 1938. The second part covers type theory; it provides a general introduction to Turing's work on type theory and covers his published and unpublished works between 1941 and 1948. Finally, the third part focuses on enigmas, mysteries, and loose ends. This concluding section of the book discusses Turing's Treatise on the Enigma, with excerpts from the Enigma Paper. It also delves into Turing's papers on programming and on minimum cost sequential analysis, featuring an excerpt from the unpublished manuscript.
This book will be of interest to mathematicians, logicians, and computer scientists.

Alan Mathison Turing (1912-1954) made major contributions to several areas of science. Today his name is mentioned frequently in philosophical discussions about the nature of Artificial Intelligence. He was a pioneer researcher in computer architecture and software engineering - his work in pure mathematics and mathematical logic extended considerably further. His last work was "On Morphogenesis in Plants". Turing was one of the leading figures in 20th century science, a fact which would have been known to the general public sooner but for the British Official Secrets Act, which prevented discussion of his wartime work. Although they were written decades ago, the papers in this volume address issues which concern researchers today.